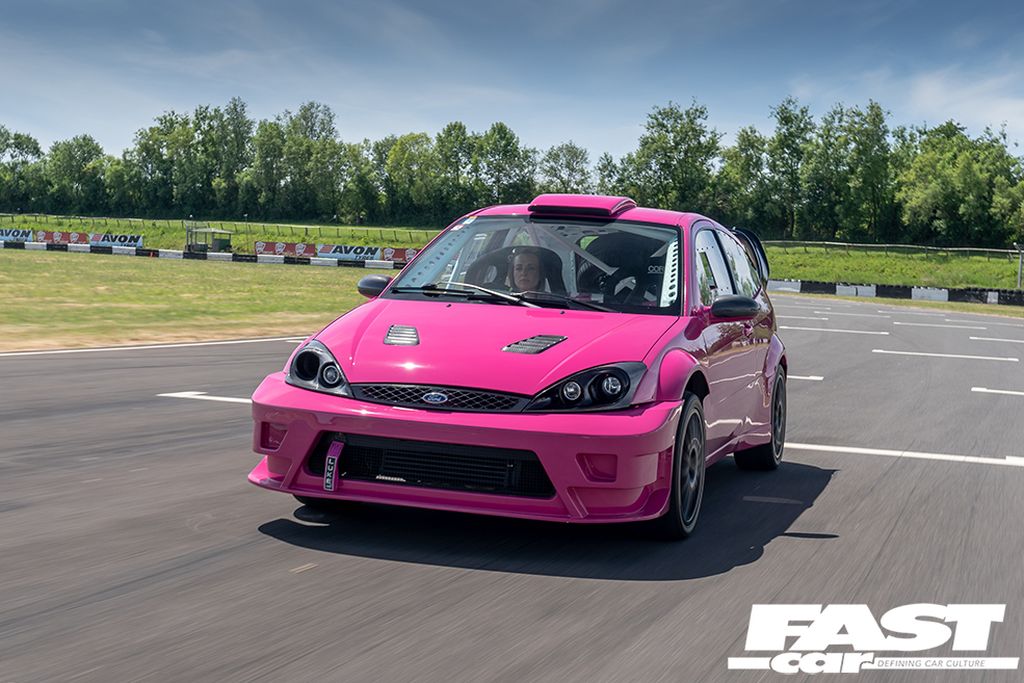 Ford fan Hannah Ward has an awesome collection of cars, the latest of which is this stunning, 582bhp Ford Focus Cosworth track weapon.

For many couples, a little friendly rivalry keeps life interesting. It might be a competition to see who can make the best sauce, who can run the fastest 10k, or simply who can drink the most beer.

But what if you’re both into fast Fords? Well, then things can get a little out of hand, especially when your other half has built some of the most sensational show cars in the UK. 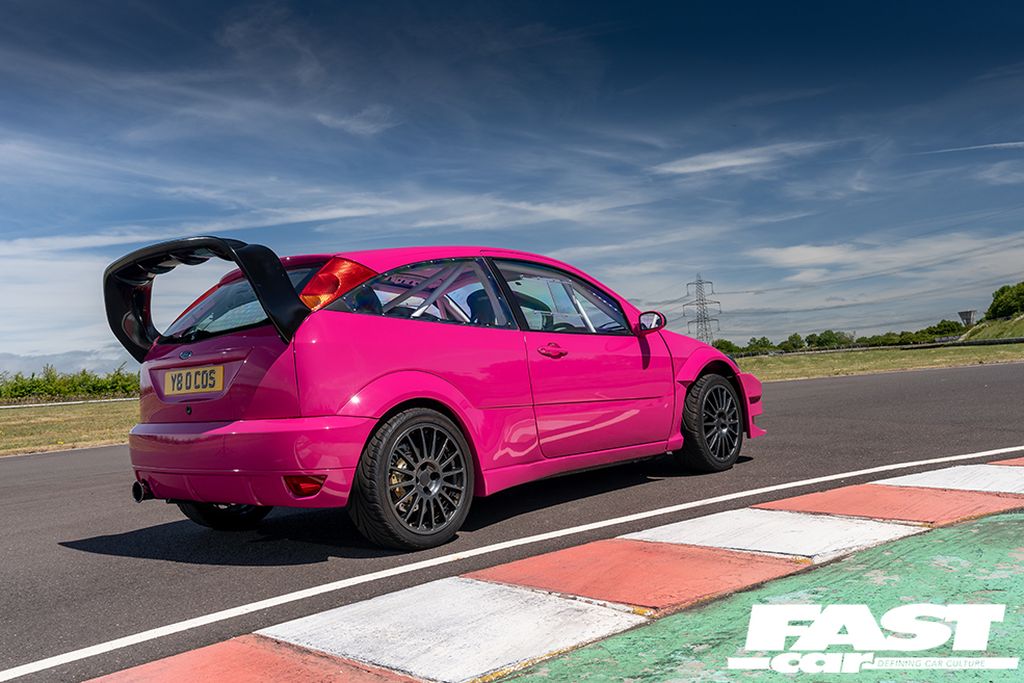 “I’ve always wanted a Cossie-powered Focus track car,” explains 31-year-old Hannah Ward. With an enviable collection of Blue Ovals already in her possession – including her Mk1 Focus RS aka ‘Rozie’, a red Escort RS Turbo, a red Fiesta RS Turbo, a black 3-door Sierra Cosworth, a red Escort Cosworth and another Mk1 Focus RS – it would have to be something rather special to get her excited. 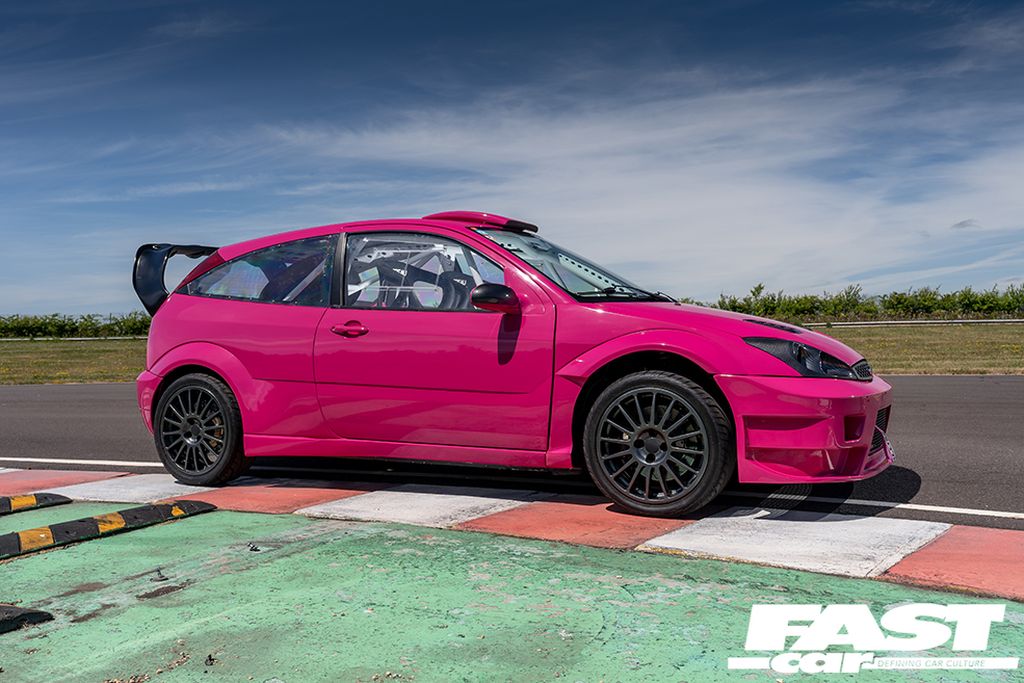 The plan was to build a car that could hold its own against her partner, Mark Hudd’s, own track weapon – a green, 580bhp Escort Cossie. The idea was that if the two cars were built to an almost identical spec – both 4WD, both stripped out and both making 580bhp with straight-cut ‘boxes – then Hannah and Mark would be on a level playing field for track days. That way, it would be down to the driver, rather than the car, as to who set the fastest laps. 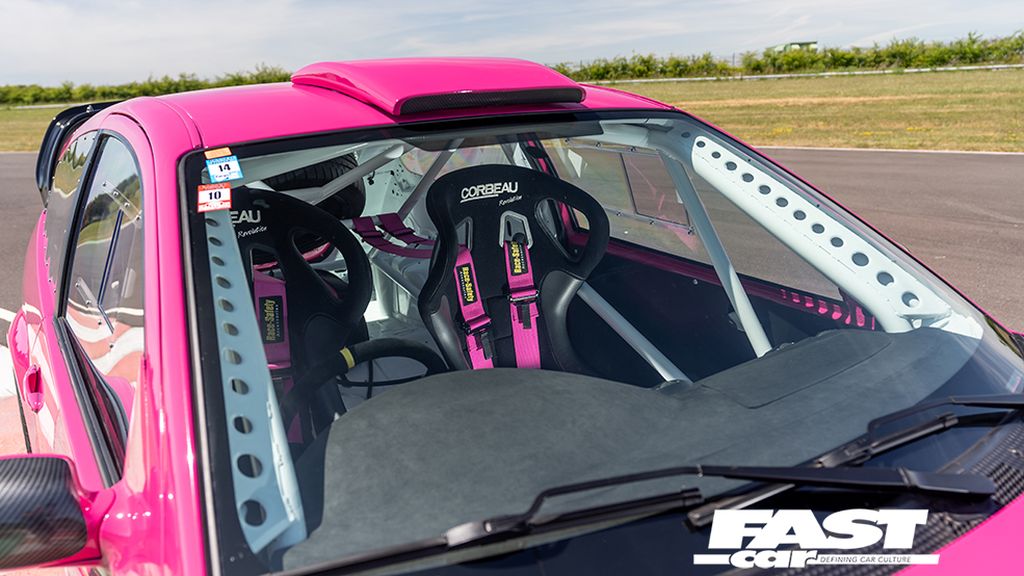 But there was another proviso: it also had to be immaculately finished. As Hannah says: “There’s nothing to say a track car has to be rough and ready. If you look after it, there’s no reason it can’t be a show car too.” And with Mark’s stunning EsCos as a benchmark, the couple had set the bar pretty high. 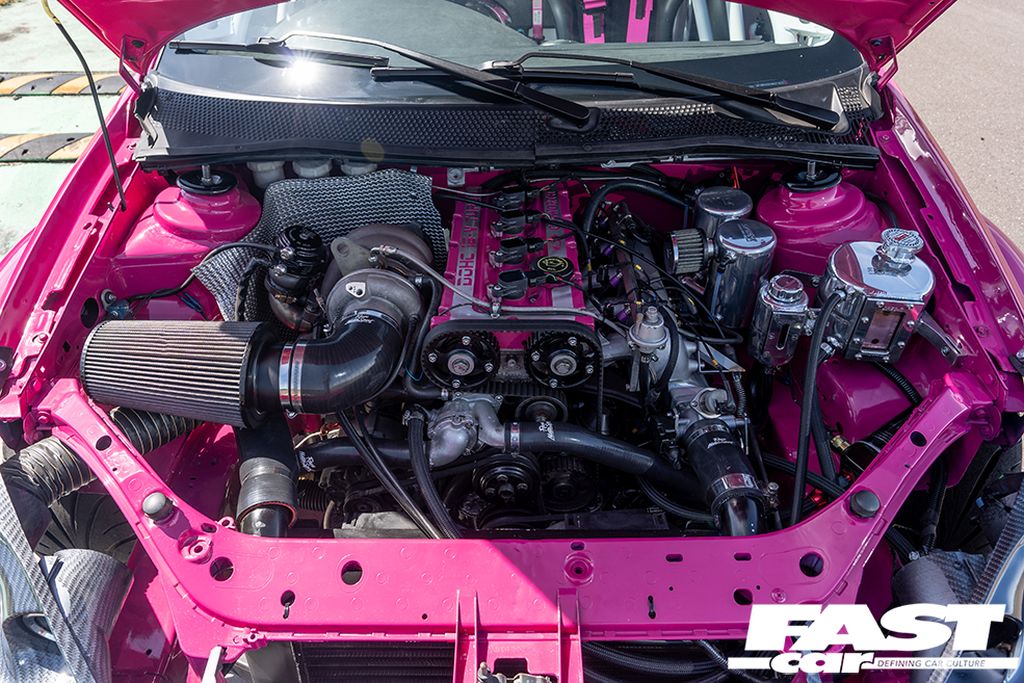 The first step was finding a suitable base for the FoCos project. Mark says, “I saw the car for sale as a rolling shell, so I decided I’d buy it for Hannah for Christmas.” Now, if you worry that giving your missus a tatty Focus with no engine or interior would result in a few nights kipping on the sofa, you clearly don’t know Hannah. In fact, she was made up with the gift and couldn’t wait to get started on it. 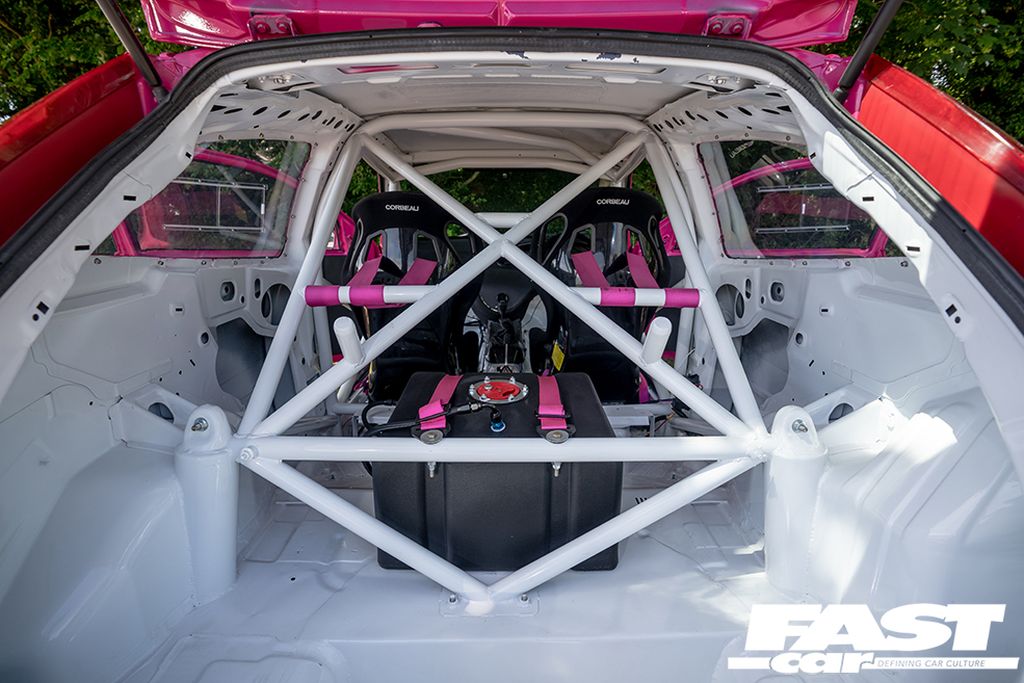 A little digging revealed that the Focus had previously been conceived as an M-Sport demo car, but that it had never really progressed much further than a rolling shell. The WRC kit had been fitted, including blistered arches (ideal for the Cossie’s wider track), plus a roof vent and that huge rear wing. The roll cage had also been welded in and the transmission tunnel fabricated to accept Cossie running gear. There was also suspension, a set of wheels and some motorsport livery. “It was white and a bit tatty in places,” says Mark, but having seen the potential, he knew it could work as Hannah’s track project. 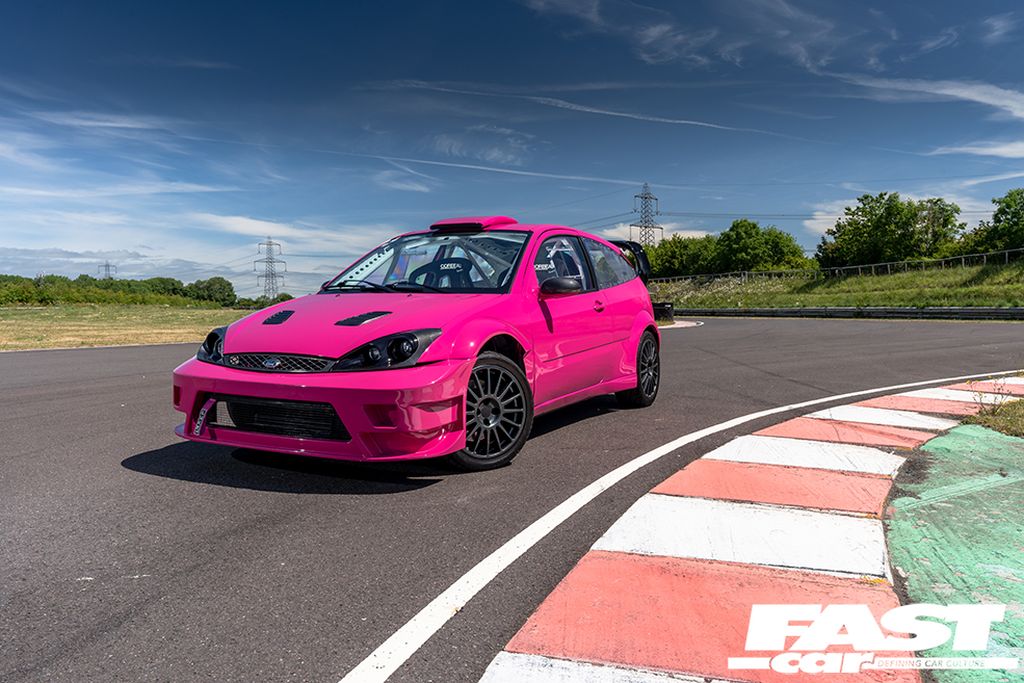 Having previously built a Mk1 Escort van and a Series One Escort RST, both with Cossie engines and 4×4 running gear, Mark certainly knows his way around a YB conversion. So getting the motor installed wasn’t the issue; the tricky bit was faffing around to get the shell ready. “The welds on the cage needed tidying and the cradle was too high, which meant the gearbox fouled the transmission tunnel, plus a few other bits that needed sorting,” recalls Mark. 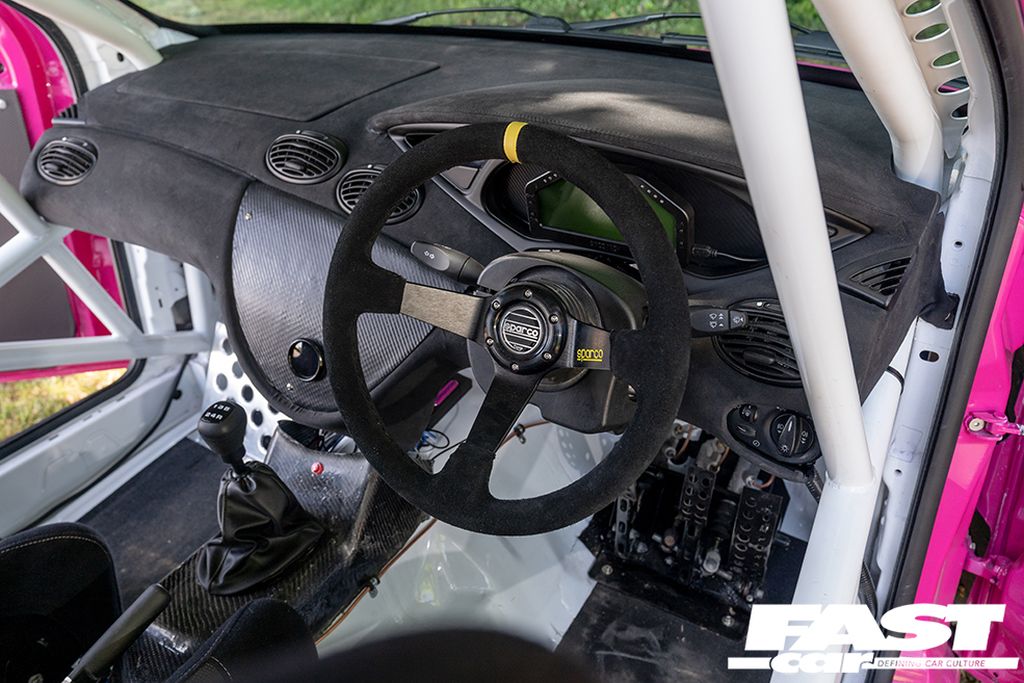 Over the next six months, steady progress was made, with Hannah and Mark (“I call him my spanner monkey!”) working on the car in the evenings. The aim was to get it ready to unveil at RS Combe, where it went down a storm – even eclipsing Mark’s green EsCos for attention – and quickly becoming known as ‘that pink Focus’.

“We had a lot of debate about colour choice,” says Mark. “I wanted to paint it the same green as my Escort, but then Hannah saw a Porsche in Rubystone Red and that was it.” 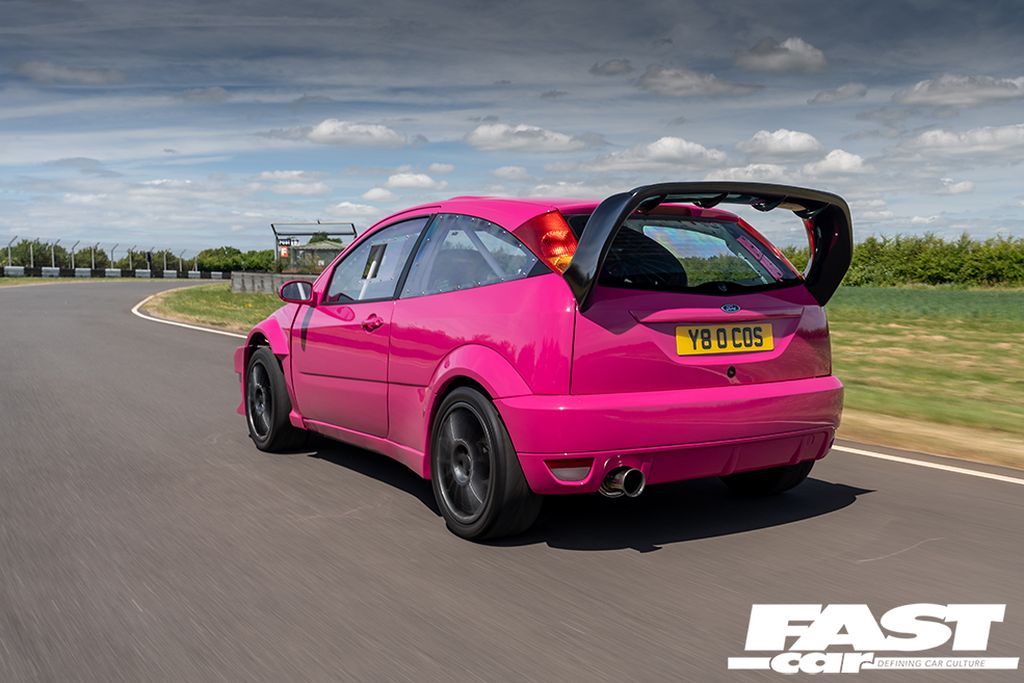 Now, it may be painted a girly colour, but there’s nothing soft about this thing. Everything about it has been designed for maximum attack. From the potent, 582bhp engine to the 4×4 drivetrain, beefy AP Racing brakes and that comprehensive roll cage, this Focus is made for one thing: going extremely fast. “I’ve driven Mark’s Escort on a few track days and really liked it,” comments Hannah. So, she knew what to expect from the Ford Focus Cosworth. 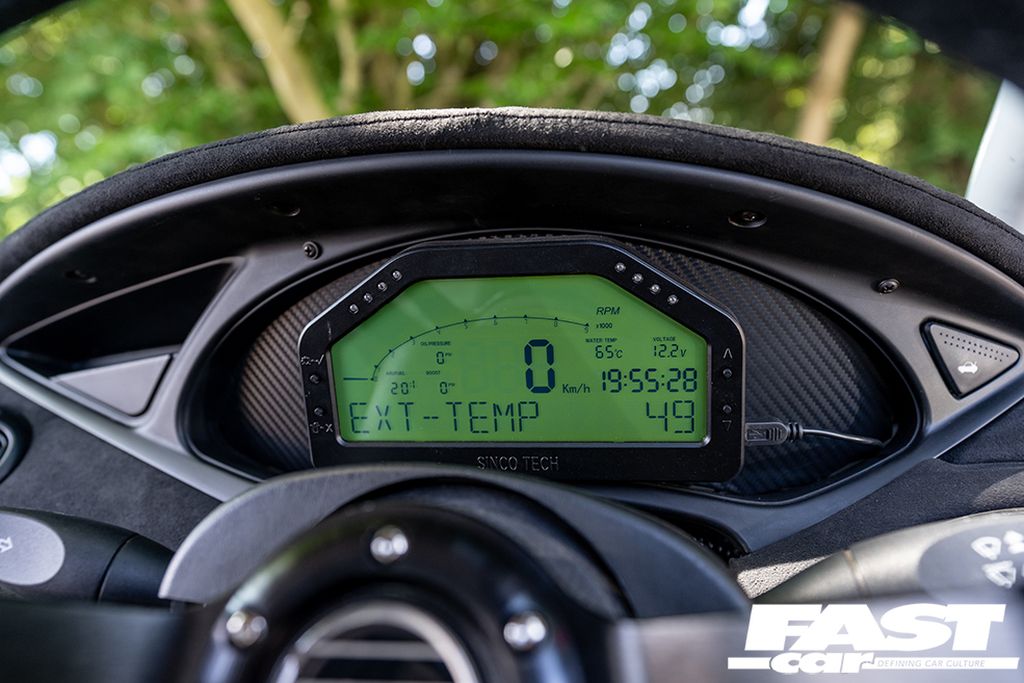 Built as an out-and-out track car, Hannah wanted it to look the part, and its WRC-lineage is clear to see. From the blistered arches and roof scoop to that huge rear wing, it’s every inch a rally-bred weapon.

It looks especially menacing from the front with that big cut-out bumper, designed to feed air to the intercooler. Add to this the carbon-effect Morette headlights (the nearside of which has an air feed) plus those Cossie bonnet vents and you have something that screams ‘get out of the way!’ (which is a distinct possibility when Hannah is pedalling it hard on track). 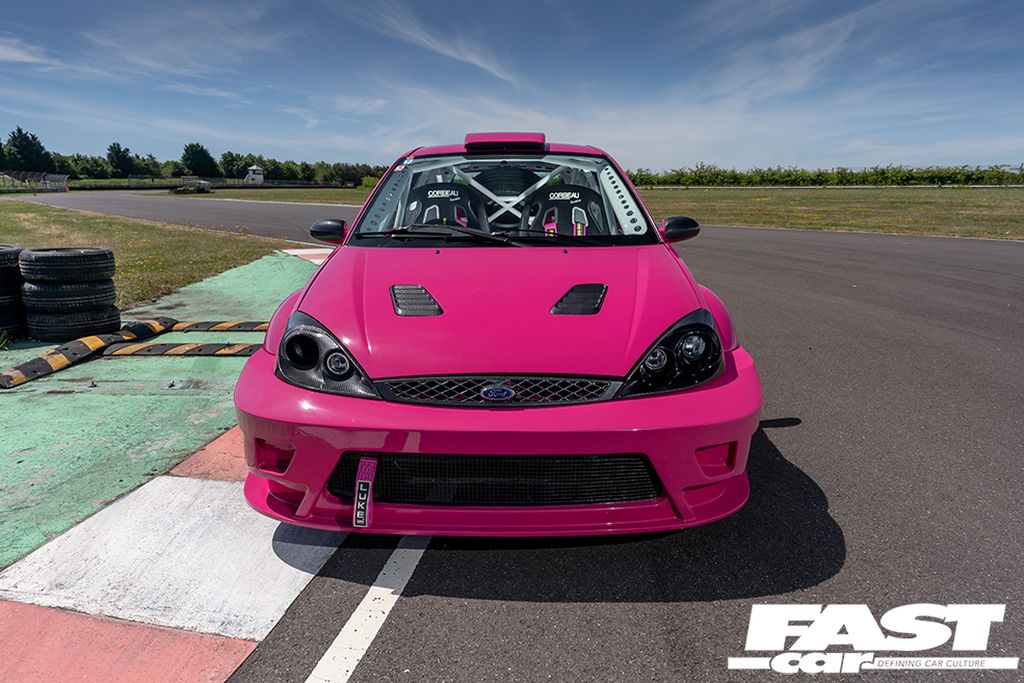 Of course, many Focuses have received the WRC treatment over the years, but this one is more than a cosmetic homage to the car made famous by a certain Mr McRae. The engine has been fully built to withstand some serious hammering on track. You can see the full list in the tech spec, but highlights include forged rods and pistons, 1000cc injectors and a mighty Borg Warner twin-scroll turbo mounted on a Nortech manifold. It makes 582bhp and 558lb.ft of torque, which is more than enough for big thrills on a circuit.

Power is delivered to all four wheels through a DPE straight-cut gearbox and features Quaife diffs to help get that savage power down. 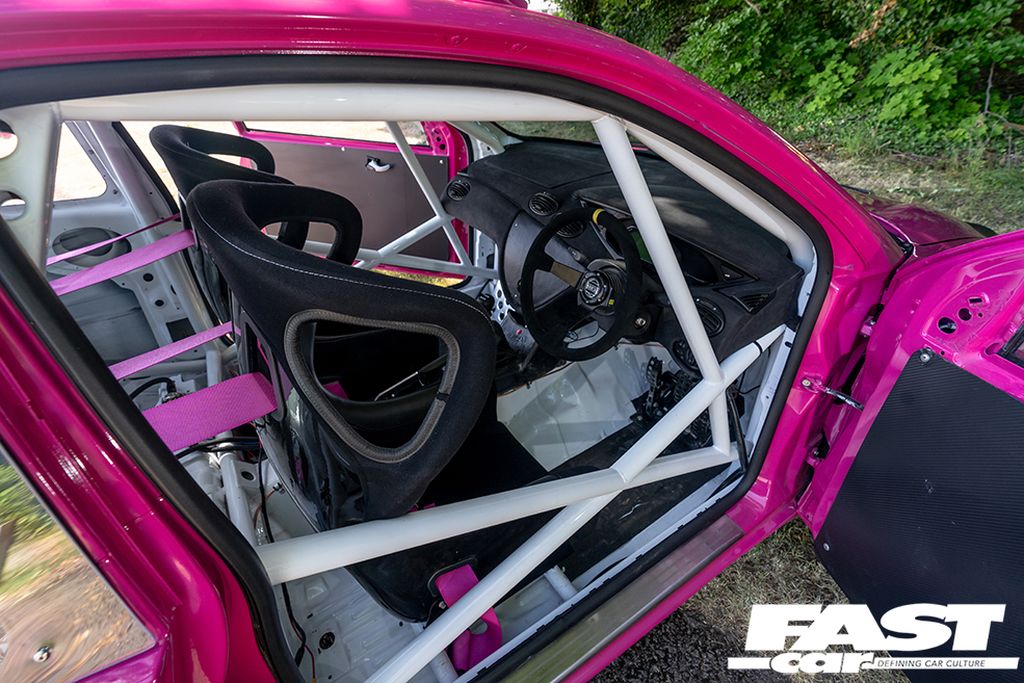 Inside, everything has been built around that comprehensive roll cage. With fast laps a given and potential for some mighty speeds – especially at the testing Castle Combe circuit – a serious cage was essential. It’s a proper job now that Mark has modified it and looks the part finished in gloss white. A pair of winged Corbeau seats (with pink harnesses, of course) and OMP steering wheel are joined by a digi dash, along with an adjustable pedal box.

Of course, the proof of the pudding is in the eating, so what was the first track session in the Ford Focus Cosworth like? 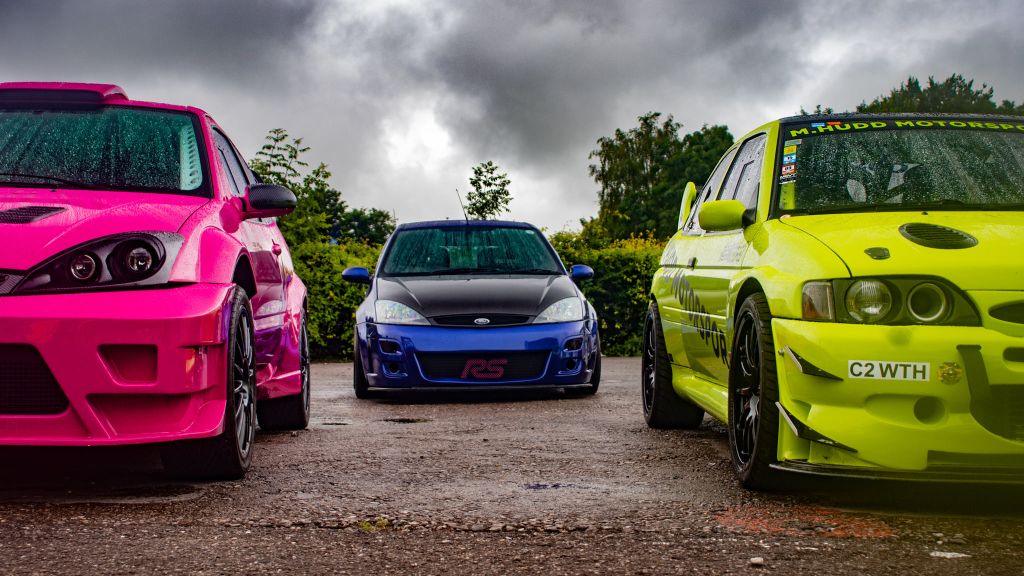 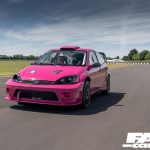 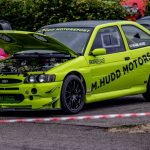 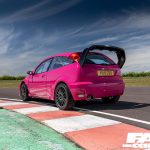 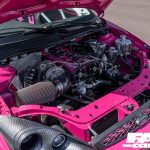 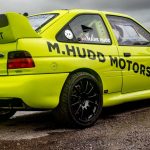 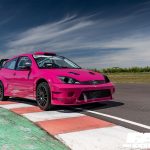 “Being able to chase Mark around in the Escort was amazing fun, and with a few more track days under my belt and the Focus really dialled in, we’ll really see who is the fastest between us,” smirks Hannah. We can’t wait to see this girl racer giving her stunning Ford Focus Coswroth a good kicking on track, so be sure to look out for it at any shows you might attend alongside a certain green EsCos, as this couple of Blue Oval fans try and prove once and for all, who’s got the fastest Ford on track. 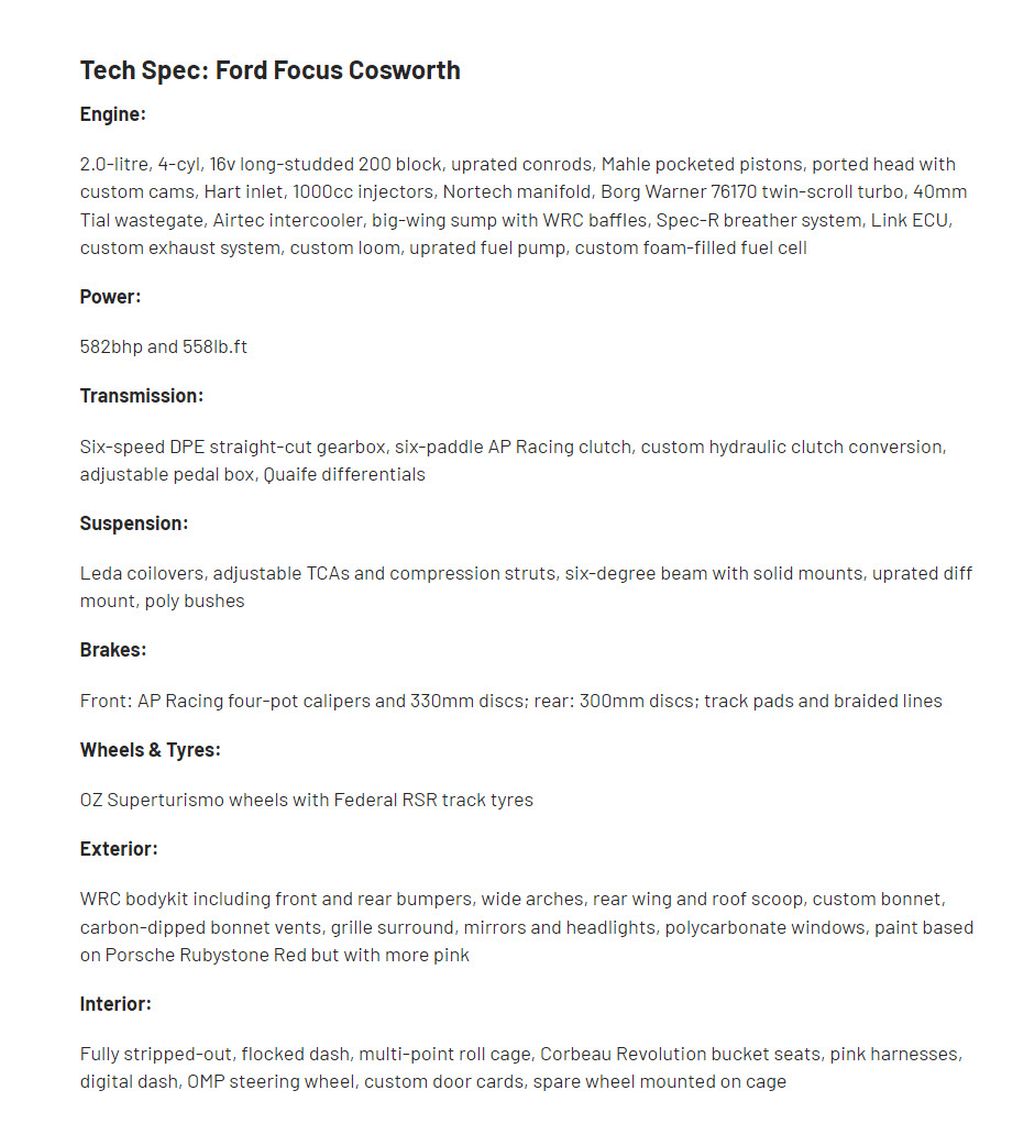