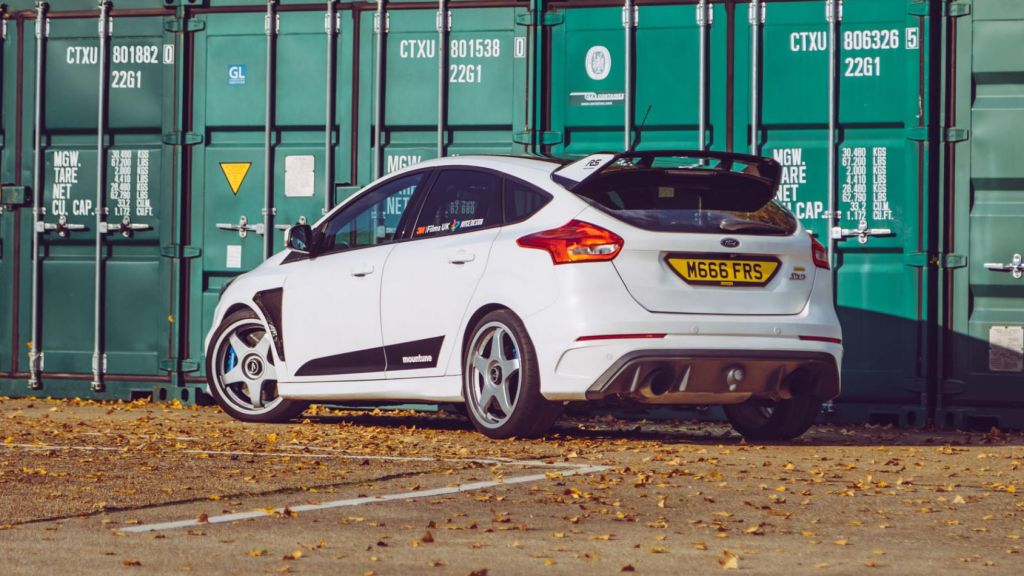 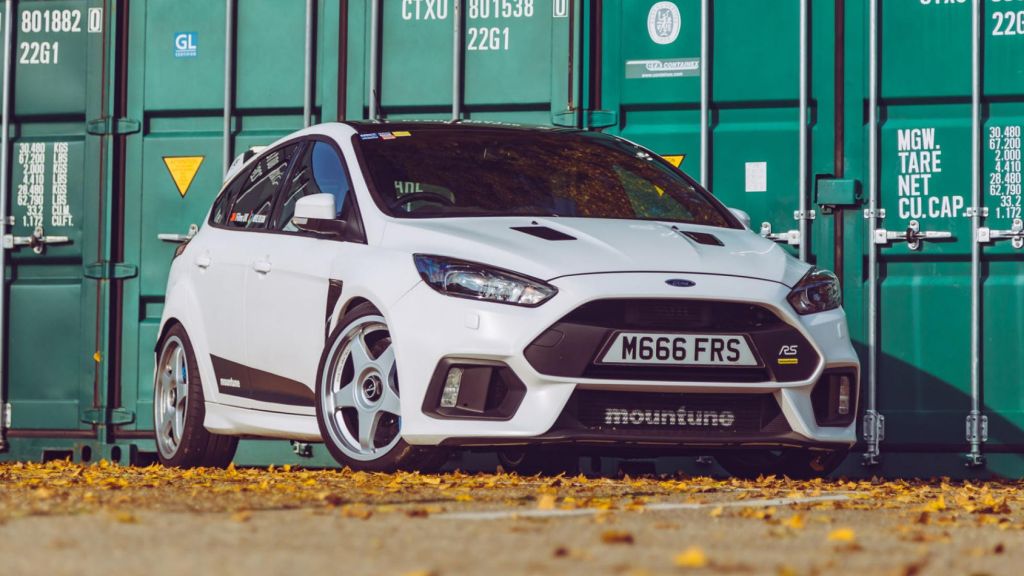 Hell, it’s 100bhp better off than the undisputed power king of mass-produced hot hatchbacks, the obscenely rapid 415bhp Mercedes-AMG A45.

Is that all we get?

Ok, I’ll explain. Put your foot down in Mountune’s RS and… nothing happens. Literally nothing until about 3,000rpm, when it starts to think about doing something. To consider the possibility of, y’know, getting a bit of a shift on. The curious whiny, wooshy noises coming from under the bonnet get louder, and the crossover a few millimetres from your bumper starts to drop back. 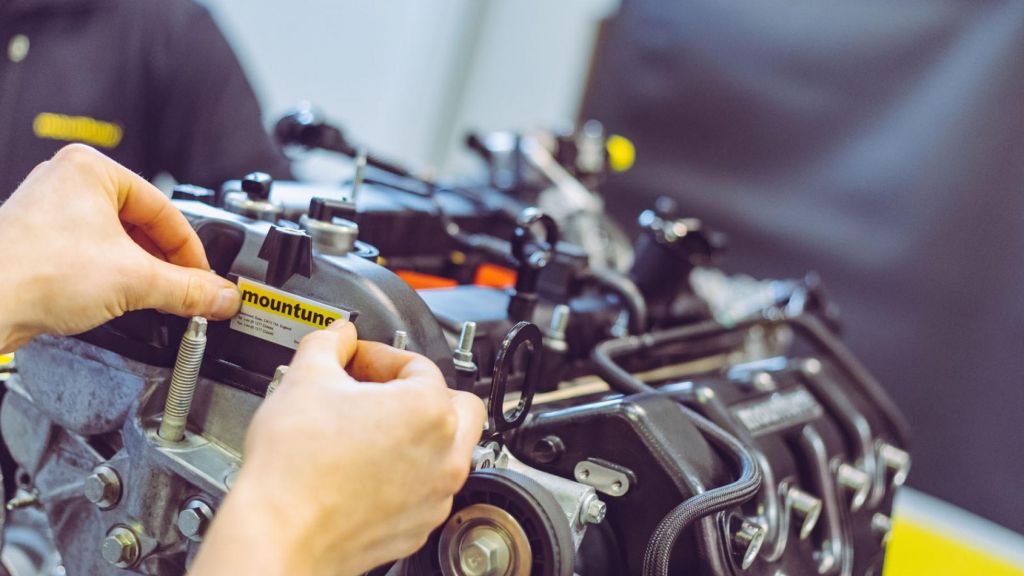 Then at 3,500rpm the world explodes, and you’re hurled at the horizon with alarming force. You daren’t look at the speedo. You can’t – your brain is busy trying to process the turbocharged haymaker the extensively fettled 2.3-litre, FOUR-CYLINDER engine has just delivered to your cerebral cortex.

And it’s struggling. Meanwhile your arms are trying to keep the thing pointing straight ahead, as the steering wheel bucks and writhes under the duress of 513 Essex-spec horsepowers. 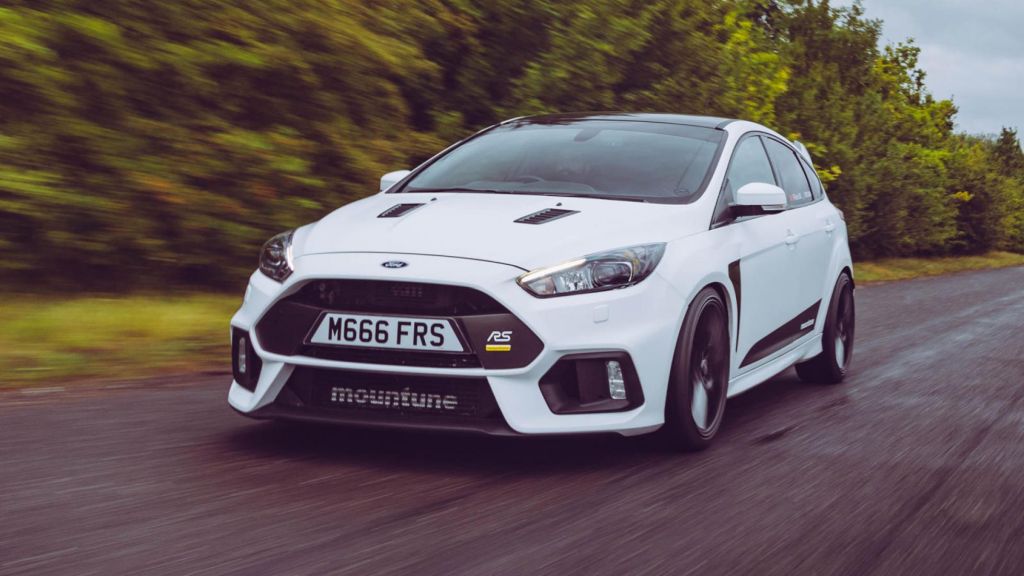 So does it feel like it’s got well over 500bhp and 500lb ft? Erm, yeah. It really bloody does. This is serious speed, from a serious car.

Where does all that power come from?

We’ll get to that. First, context.

Mountune started out in the Eighties building race engines. It still does, in fact, but nowadays it’s probably better known by fairweather petrolheads for lightly modifying Ford hot hatches. 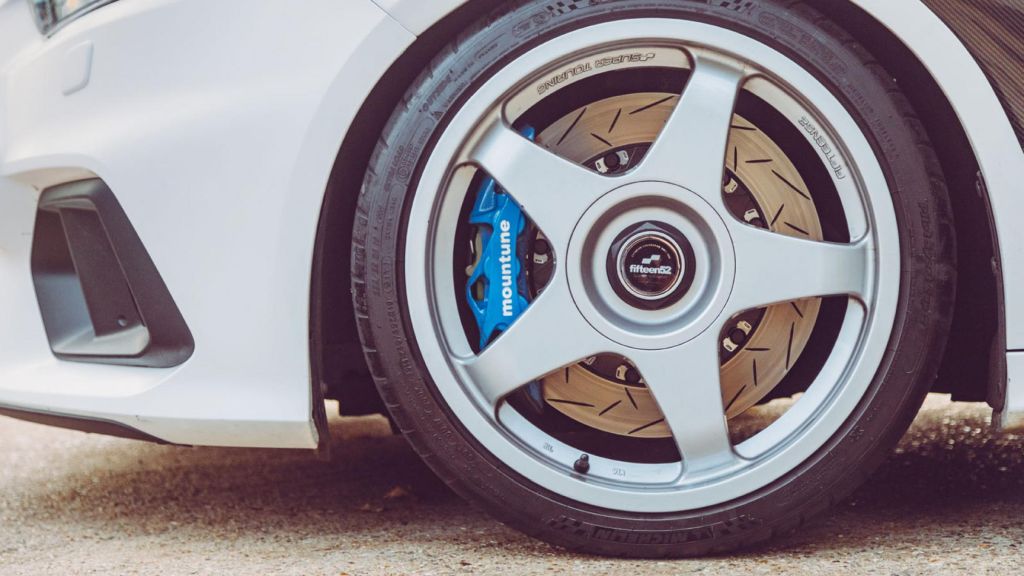 Back in the day Mountuning your Fiesta ST was a bit of a no-brainer – the tuner’s £599 kit for the last-gen ST consisted of a new airbox, air filter and ECU tweak for more power. Crucially, though, it didn’t void your Ford warranty. Heck, you could buy the kit and have it installed at your local main dealer.

The same was true of the so-called FPM375 upgrade for the RS. For £899 it gave you an extra 25bhp and 30lb ft, thanks to a reprogrammed ECU and upgraded air filter, crossover duct and dump valve. 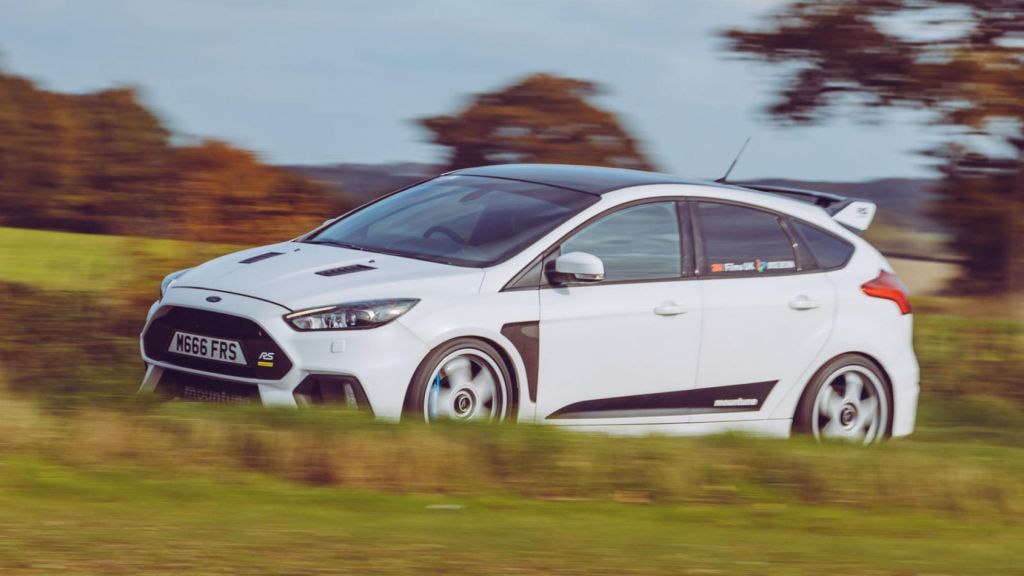 Good though they are, Ford doesn’t warranty Mountune’s kits anymore. These days you can install them yourself with nothing more than a special app for your phone (that talks to your car via Bluetooth) and a Philips-head screwdriver. Half an hour later you’ve got another 30bhp to play with.

But the ‘m520’ kit fitted to this RS… isn’t something you can fit yourself, unless you’re VERY confident in your own spannering skills, have access to a pro-level workshop and/or work at Mountune. Costs a fair bit more, too. 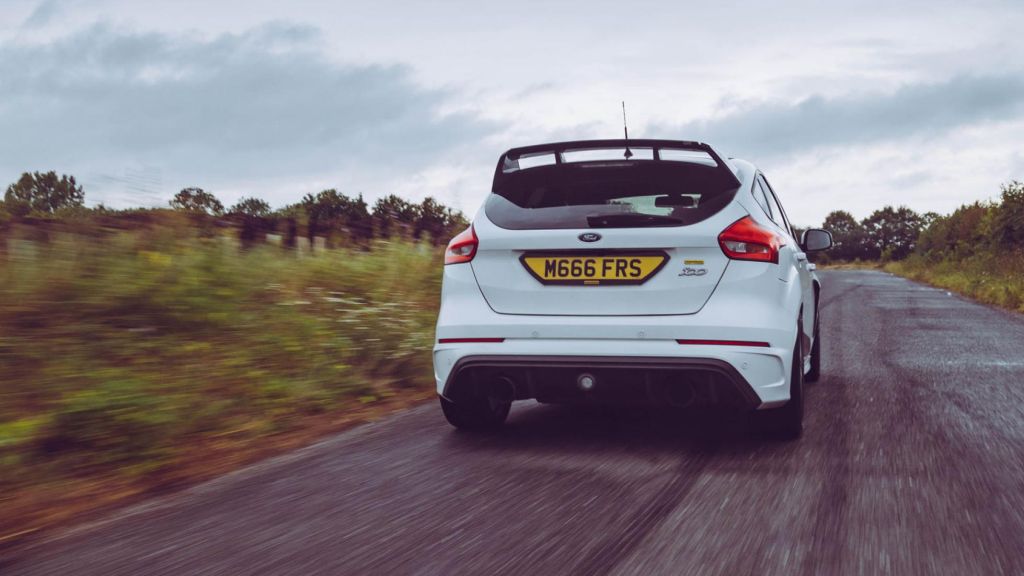 How much are we talking?

A little under £14,000 before you even consider doing anything to the transmission, suspension, brakes or body. As it sits, this RS (Mountune’s development car) wears well over £20,000 worth of modifications, including carbon-fibre front wings, two-way KW adjustable dampers, a Quaife ATB differential and Michelin Cup 2 tyres.

“We initially thought if we do ten this year [2019] that’ll be great. But we sold the first ten in about a month,” Mountune boss Alec Pell-Johnson tells us. “A lot of the guys are going from standard, which is an enormous change. Also an enormous amount of work.” 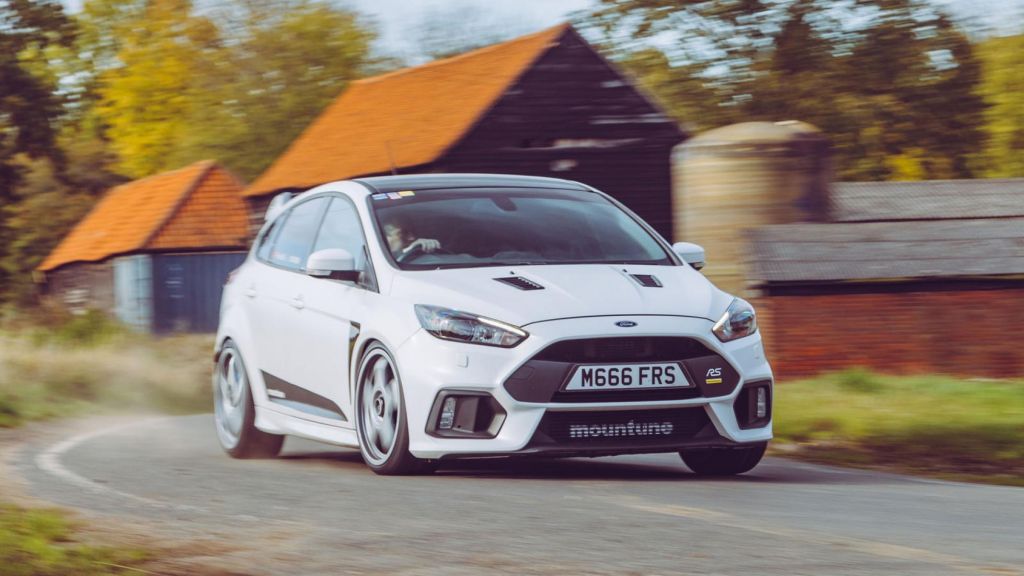 The upgrade, which involves completely removing the engine from the car, takes the company’s technicians about a week. They equip the 2.3-litre ‘EcoBoost’ engine with the stronger components it needs to make supercar-baiting power. “We source those parts from our race engines. And we already knew they.

The main components of the upgrade are the all-important forged internals, plus a bigger, better turbocharger with ceramic bearings from BorgWarner (the single most expensive component). Then there’s the high-pressure fuel pump and countless new hoses and gaskets, a three-inch exhaust and upgraded intake and intercooler. “You need the full air-cooling, oil-cooling, water-cooling kits,” Alec explains. “We haven’t ever had any overheating problems on ours, nor any we’ve ever done as far as I know.” 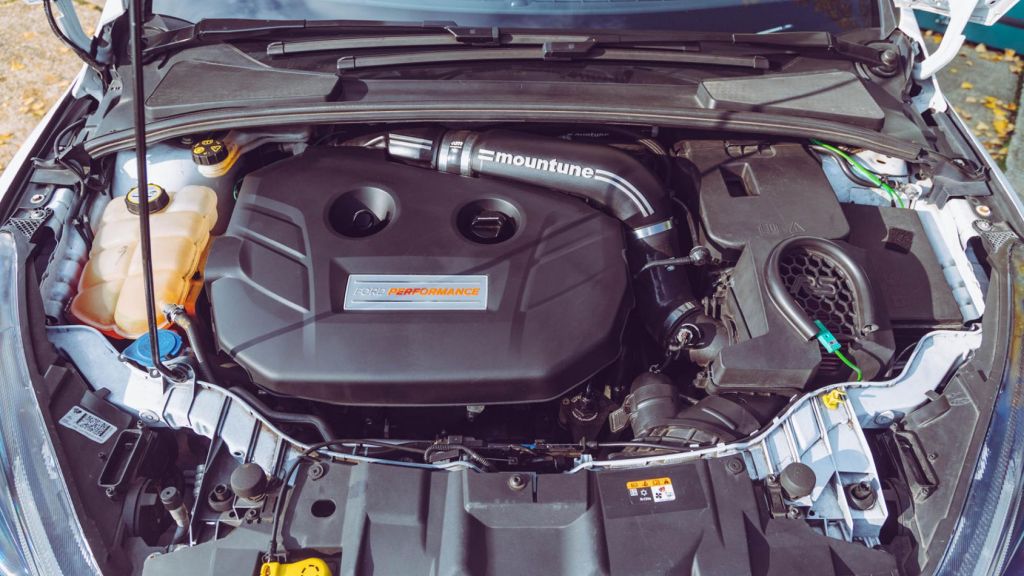 When the mechanics have finished putting the engine together and successfully reunited it with the car itself, Mountune usually does around 500 miles of testing before handing it back to its owner, just to make sure everything’s working as it should.

It is, but drive normally and the Mountune RS is actually quite docile – easy enough to tool around in at halfway sane speeds if you row through the gears nice and early and stay mostly off-boost. 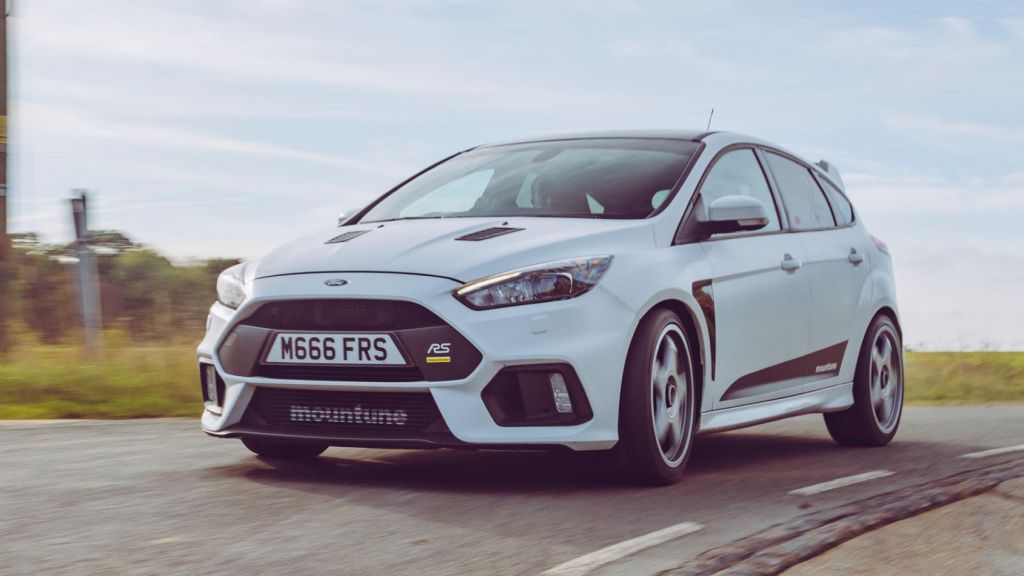 It isn’t vastly more thirsty than a normal Focus RS, which admittedly is hardly the most economical car to begin with, and those KW coilovers (£2,083) are an absolute triumph. Firm, yes, but supple enough you won’t have to marry a chiropractor just so they can check you over every time you get home.

Definitely worth having. The only real complication is the racy clutch, which is a bit finickity in traffic. Otherwise, standard Focus RS pitfalls remain – chiefly the driving position set a couple of inches too high and mish mash of an interior. 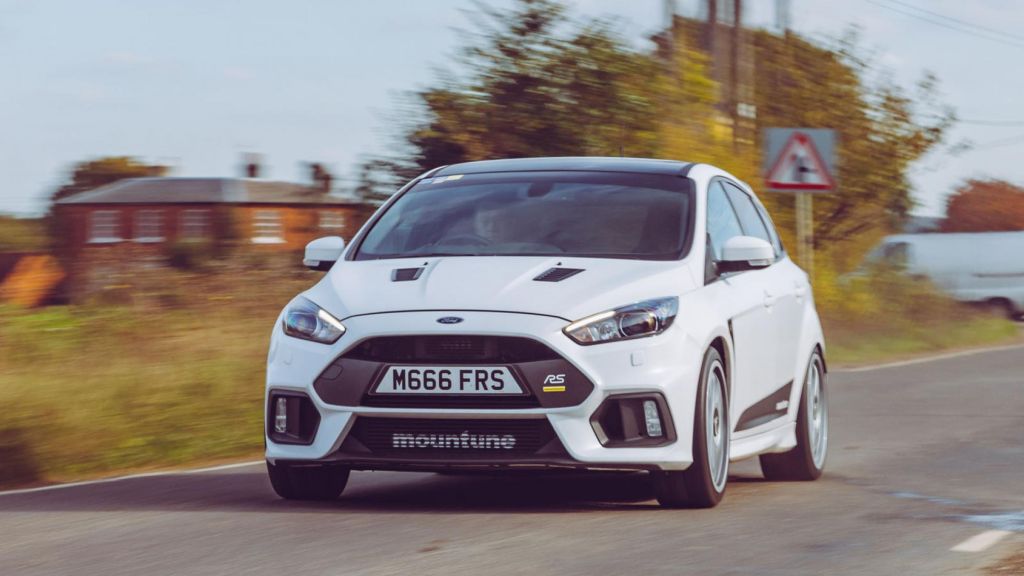 While the m520 doesn’t feel like anything the Ford of 2020 would sell itself, that Mountune has somehow managed to maintain its everyday usability is very impressive indeed.

But I wanna go fast. Can you actually enjoy it on public roads?

Obviously opportunities to use all the power for any length of time are few and far between, though that’s true of any car with more than let’s say 300bhp. But the Mountune RS is nonetheless great fun, even though driving it is an experience totally dominated by the explosive thwack of speed that makes mile straights feel about three feet long. 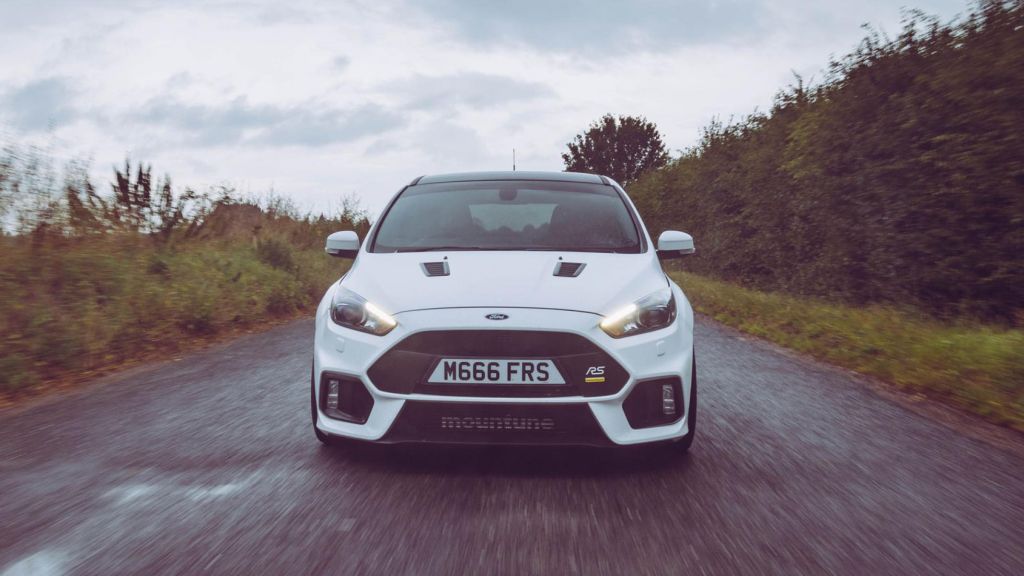 It’s a laugh-out-loud kind of car in a breathless, “thank God I survived” kind of way, with a cat-back exhaust that pops and bangs more loudly than any I’ve ever experienced and tough, motorsport-y vibe. It doesn’t feel in the least bit delicate or highly strung – like a serious, well-built item that doesn’t suffer fools lightly. Disrespect it at your peril – to drive this thing quickly is to give it your full and undivided attention, lest it get you into serious trouble. 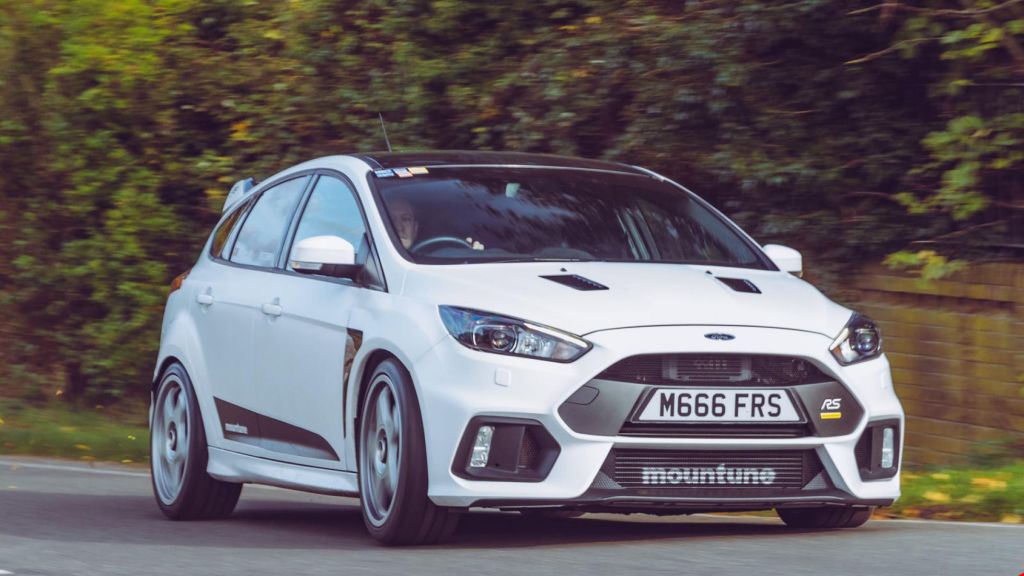 Mountune do lesser kits for the RS, and the sweet-spot between power/chassis/sanity may well be with one of those. But for the hardcore few, the m520 is as wild a hot hatch as I’ve ever driven and feels properly screwed together. Mad, but excellent.