Ford Focus retains its title as world’s best-selling vehicle nameplate for 2013, according to Ford analysis of the just-released full-year Polk new vehicle registration data from IHS Automotive. The news comes as a new Focus 4-door prepares to make its debut at next week’s 2014 New York International Auto Show. Ford has taken the model’s acclaimed fun-to-drive DNA up a level with enhanced handling and steering for the new Focus. Ford engineers have delivered a more solid, responsive and connected-to-the-road feel by increasing the structural stiffness at the front, revising the suspension geometry, increasing lateral stiffness of “steering-relevant” suspension bushes, retuning the shock absorbers and incorporating a new Electronic Stability Programme. The Electric Power Assist Steering also has been retuned to make the driver feel even more connected to the road.

Ford has improved its popular Active City Stop collision avoidance system, which pre-charges the brakes and – if the driver still does not respond – reduces engine torque and automatically applies the brakes to reduce the impact of collisions. It has been enhanced to operate at speeds of up to 50 km/h, compared to 30 km/h with the current version.

Ford also is introducing to Europe the Pre-Collision Assist system. This works in a similar way to Active City Stop but with a much greater vehicle detection range to support the driver at higher speeds, for example on the motorway, by issuing warnings and if necessary applying braking.

The current Adaptive Cruise Control technology enables Focus drivers to maintain a set distance from the vehicle ahead, even when that vehicle is travelling more slowly than the cruise speed. For occasions when Adaptive Cruise Control is not active, Ford is now introducing to Europe for the first time the new Distance Alert and Indication system, which enables drivers to set a preferred distance they would like to maintain with the vehicle ahead. 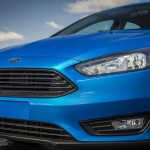 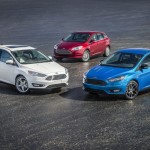 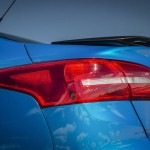 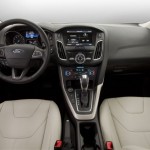 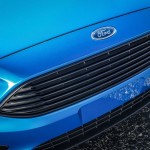 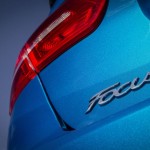 A new package of sensor-based, driver-assist technologies brings a new level of convenience for Focus customers including Cross Traffic Alert, which warns drivers of vehicles approaching when reversing out of a parking space; Perpendicular Parking, a new hands-free parking technology that builds on the Active Park Assist system introduced with the current Focus and helps drivers reverse into spaces alongside other cars in addition to parallel spaces; and Park-Out Assist, which helps drivers avoid obstacles as they exit a parallel parking space.

Focus will be the first European Ford vehicle to offer the voice-activated in-car connectivity system SYNC 2 that facilitates easier access to audio, navigation, climate control and compatible mobile phones. Simply pushing the voice control button and saying “I’m hungry” will bring up a list of local restaurants, which you can then get directions to.

New Focus also will be equipped for the first time with Ford’s MyKey technology. MyKey enables owners to programme a key – usually for younger drivers – that restricts top speed, reduces the maximum volume of the audio system, and can disable it altogether if driver and passengers are not using safety belts. The improved Adaptive Front Lighting System adjusts the beams of the new Bi-Xenon HID (High-Intensity Discharge) headlamps to best suit the road layout. The system assesses the ambient light surrounding a vehicle, as well as objects in the road ahead and then adjusts the headlight beam angle and intensity to one of seven settings depending on the vehicle’s speed, steering angle and distance to an object in front.

In addition to a host of styling and technology advances, the new Focus will offer the remarkably efficient, fun-to-drive 1.0-litre EcoBoost engine – International Engine of the Year, for 2012 and 2013 – with a six-speed transmission, surpassing the fuel efficiency of the previous model.

“New Focus offers a host of new and cutting-edge features and technologies, but at the same time this latest version has been refined and simplified,” said Sherif Marakby, vehicle line director, Ford of Europe. “The sophisticated redesign has given Focus a new, fresh and modern style both inside and out, but the soul of Focus is the fun-to-drive feeling you get when you’re behind the wheel, and we’ve not compromised on that – in fact, we’ve improved it.” The debut of the new Focus 4-door and the Focus Electric in New York follows the Geneva Motor Show debut in March of the Focus 3- and 5-door hatchback and wagon. A new version of the performance Focus ST will be shown later this year.

Ford builds the Focus in eight manufacturing plants on four continents. Facilities in Germany, the United States, Russia, China, Vietnam, Thailand, Taiwan and Argentina have a combined capacity to build more than 1.5 million Focus cars annually at a rate of more than two per second. Since the launch of Focus in 1998, the best-selling vehicle nameplate in the world for two years running has sold more than 12 million vehicles globally.

Polk data also confirm Ford Fiesta earned the top spot as the best-selling subcompact car globally, with 735,299 registrations for 2013. Together, registrations of Ford’s small cars – Fiesta and Focus – totalled 1,832,917 vehicles last year, which is a 4.3 per cent increase from 2012.