Airwaves Racing celebrated a return to the rostrum alongside a trio of top ten finishes as the Dunlop MSA British Touring Car Championship (BTCC) roared back into action at Snetterton this weekend (2/3 August).

The championship’s return from the extended summer break saw a rejuvenated Airwaves Racing squad refocus its challenge on the championship with Mat Jackson claiming a stunning second place finish in the weekend’s finale backed up with a further three top ten results for the Motorbase-run outfit. With the Norfolk circuit basking in glorious August sunshine, Saturday’s free practice sessions promised so much for Airwaves Racing with Mat Jackson sitting in P2 for most of the sessions. Jackson however was left feeling a little frustrated by the traffic on track with his best attempt at a fast lap hindered and the Airwaves man had to be content with a credible P9 finish. Airwaves Racing team-mate Fabrizio Giovanardi used the session to trial new a set-up on the #7 Focus ST as a grid drop penalty from round 5 at Croft meant the Italian would start the weekend at the back of the grid.

Sunday’s opening race started well for both Airwaves cars with Jackson making his way up into P6 by the first corner. Fabrizio made a blistering start on the Dunlop soft compound tyres making up an incredible 11 places by the end of the first lap. As the race progressed it was a case of zero to hero for the double BTCC champion as the Italian showed his true class in the Mountune-powered Ford Focus ST, astonishingly managing to keep his nose clean as he systematically worked his way through the field to finally cross the line in P13, an improvement of 18 positions. Mat’s success was marred slightly by a tyre issue that dropped him slightly further back down the order, but the Airwaves man held on well to pull back a P8 finish at the chequered flag. 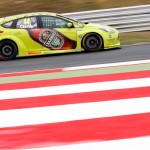 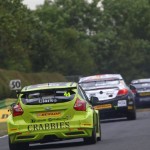 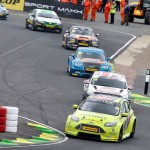 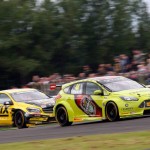 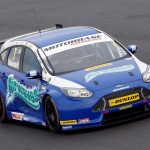 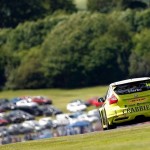 With race 2 marking Mat’s 250th BTCC race, the Airwaves Racing driver was presented with a special commemorative ‘Sampson’ laurel; a Motorbase Performance team talisman. The little injection of luck certainly seemed to pay off for the Airwaves Focus ST’s with both cars managing to avoid Menu’s Passat as it spun across the track on the opening lap. With the Airwaves duo escaping unscathed, both Mat and Fabrizio took full advantage of the melee to steal into P6 and P7 before the appearance of the safety car. As the race restarted, Fabrizio gallantly held off a robust challenge from Aron Smith and both Mat and Fabrizio ended the race in P6 and P7 respectively.

The reversed grid draw result for the final race of the day saw Fabrizio and Mat slot into P2 and P3 and the Airwaves pair looked set to challenge for the lead straight off the line. Both Fabrizio and Mat made a good start to race and were right on the pace of race leader Smith with less than half a second between them. As the race progressed Mat’s soft tyre selection came into play and the Airwaves pair switched positions before Mat mounted his first challenge on the lead. Fabrizio played the perfect team-mate role, holding off a charging Turkington and the following pack for the closing laps of the race. As the final lap unfolded an uncharacteristic error by Fabrizio resulted in the #7 Focus leaving the track and the Italian took contact as he re-joined and dropped down the order to end the race in P13. Despite Mat running side by side with Smith as they battled for the win in the closing laps, the Airwaves man just couldn’t make the move stick and the #6 Focus crossed the line in P2, marking Mat’s third podium of the season.

It was a frustrating weekend for Crabbie’s Racing team-mate Jack Clarke and a case of what might have been after damage to his #44 Ford Focus ST ended the BTCC rookie’s race day challenge. Jack showed promising pace in the weekend’s opening race running comfortably mid-pack and just outside the points for the majority of the race, unfortunately a coming together with Depper in the closing laps saw the Crabbie’s Racing Focus slip back down the order to end in P19. Race 2 initially fared better for Jack who looked to be on for another strong points finish. Regrettably, after being side swiped by Scott’s Passat, Jack was forced to pit the Crabbie’s Focus for emergency repairs and had to re-join at the back of the race.

Starting in P24 for the final race of the day, Jack had a momentous task ahead of him to claim a positive result and his luck didn’t change when the Crabbie’s-backed Focus was taken out in the opening lap by Welch’s Proton. Despite yet another set-back, Jack got his head down, concentrated on the job in hand and eventually battled his way back though the pack to finish in P22. The weekend’s provisional results see Mat consolidate his sixth position in the overall and fourth in the independents driver standings. Fabrizio currently lies tenth overall and sixth in the independents standings whilst the Airwaves Racing team maintains its fourth place position in the overall teams’ and third in the Independent teams’ standings. Next stop on the BTCC calendar is Knockhill, Scotland over the August bank holiday weekend (August 23/24).

Team Manager Oly Collins said:
“All in all we had a very good weekend. Mat had another great weekend and almost got that elusive win in race three, and showed good pace all weekend. Fabrizio had a tough challenge ahead of him starting from the back in race 1 but showed his class to come through and almost get a podium. Missing out on that was a real shame. Jack had a really tough weekend through no fault of his own which was really frustrating. Once again the team was at its usual best and the results are very much born from their hard work off the track as well as the drivers on it.”

Airwaves Racing driver Mat Jackson said:
“We’ve gone forward in every race which is great you can’t ask for any more. Overall it’s been a very positive weekend. The changes that have been made to the car in the last race have definitely put a direction in the car where I feel we need to go. It’s very timely with the test coming up on Tuesday, it means we can investigate and develop on that going forward. We’re in a good place, all we need to do is keep out of trouble in the championship and that’s the aim from my side. Just not to make mistakes and get involved in trouble.” 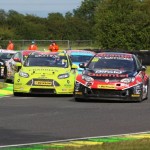 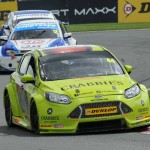 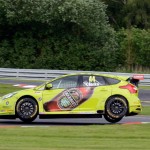 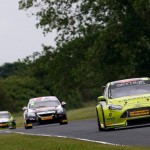 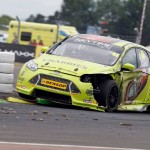 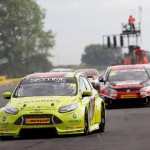 Airwaves Racing driver Fabrizio Giovanardi said:
“I’m happier with the car, but honestly I don’t know why we’ve found something better. The test on Tuesday will help us to understand the changes and set up a bit more and to be sure that it’s a good way to go. I enjoyed the race and the weekend a lot more than the past couple of rounds, but again it was so close to try to win but it’s a nightmare. Yesterday we tried a lot with the car, and it helped a lot but we need more. It’s still difficult for my style with the car, but it has to come half from me and half from the car.”

Crabbie’s Racing driver Jack Clarke said:
“I’m obviously very frustrated because I felt like this was the weekend to start translating the pace that we’ve had into results. You could see that had I not been taken out in race 2, I was ahead of Depper who finished 12th, we had a really strong car and I wouldn’t have been a million miles away from a top ten – so a relatively small turn of events could have ended up with me being in the top ten.

“I’m very close to my fortunes changing I think but right now I’m in limbo and I’m in the wrong neck of the woods. We need to sort qualifying out and get away from some of these guys. Some of the stuff that hindered my race weekend was really poor so I’m a little bit disappointed with that, but our pace gets better and better each weekend. I’ll come back fighting at Knockhill and we’ll be ready to go.“