You might have thought diesel-powered hot hatches would be the first victim of the wider downturn, but Ford (among others) is grimly sticking with the concept of a go-faster oil-burner. The usual rules apply: the ST Estate gets the petrol model’s styling enhancements and a similarly fettled chassis, but with a less powerful, weightier lump over the front axle.

As ever, there’s absolutely no guarantee that the same level of driving reward will survive the migration. Logic would suggest it won’t. 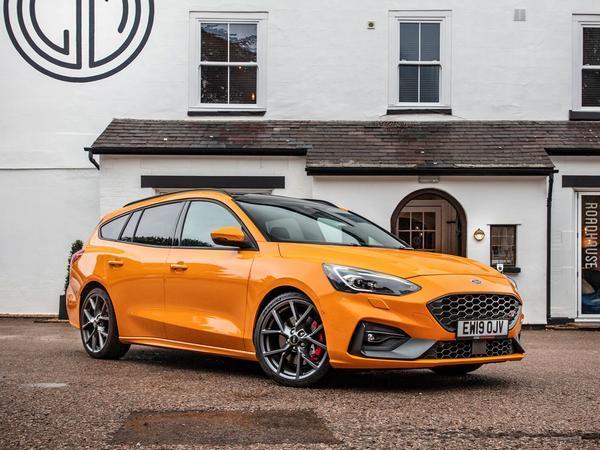 Nevertheless, it is a cold-hearted sort of logic which typically instructs an ST buyer to begrudgingly tick the diesel box. Ford’s 2.0-litre EcoBlue motor has 190hp and 295lb ft of torque, with the two peaks coming in quick succession – the latter arriving first from 2,000rpm and the former at 3,500rpm.

The swift arrival of that grunt means the diesel Estate is the most capable load-lugger of the line-up, hauling up to 1,800kg of braked trailer, 200kg better than the 280hp/310lb ft petrol ST and, critically, identical to the Octavia vRS TDI, its closest competitor. Like the petrol, it’s only four litres shy of the Skoda with up to 1,576 litres of boot space.

The Ford is marginally more powerful than the Octavia, and hauls itself to 62mph sixth tenths quicker. Which is impressive when the claimed kerbweights suggest that the Focus is more than 100kg heavier.

Among other factors, that almost certainly contributes to a deficit in efficiency: 58.8mpg and 125g/km of CO2 compared to 62.8mpg and 119g/km for the vRS. Small dice if you were weighing up petrol models – but in the DERV-sipping stakes, that difference is likely to weigh heavy on the customer base. 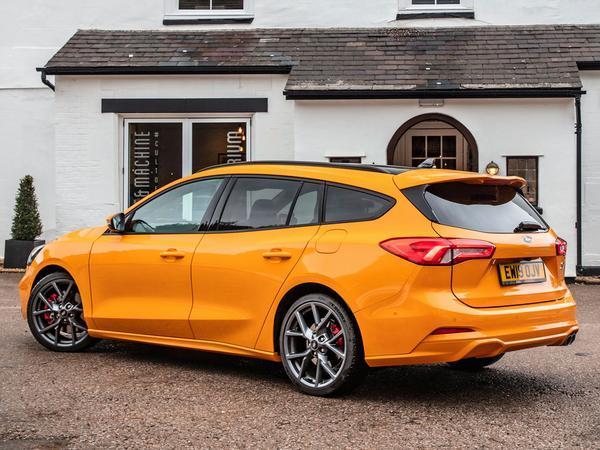 Start the ST’s turbocharged four-pot up and you’ll find the typical clatter only audible if you’re sat in complete silence or with the windows down. The tone doesn’t change until you give it some welly, when piped-in induction noise takes centre stage and completely drowns out any sounds travelling naturally through the bulkhead, giving the diesel a deeper, more gravelly voice than even the rorty petrol.

It really gets up and goes, too, pulling with a noticeable jump in force at 2,000rpm, before fading off after 4,500rpm in typical fashion. Unsurprisingly, its delivery has much in common with the Skoda’s own 2.0-litre unit – but the ST does seem to offer a tad more gusto, helped no end by a precise sort of six-speed manual. 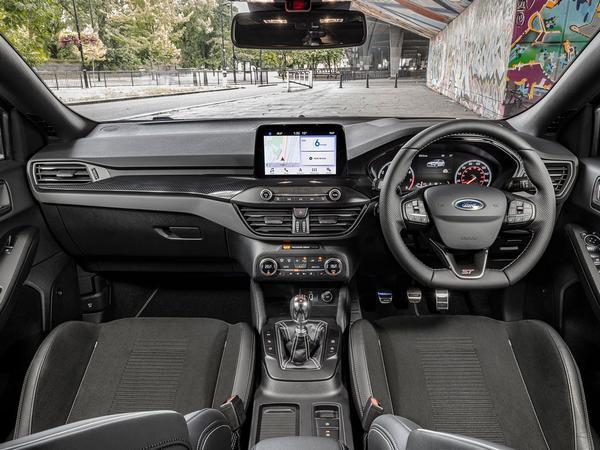 Build up to motorway pace and the motor settles to 1,900rpm at 70mph and is practically inaudible, meaning the ST does an unsurprisingly good job of playing a boggo Focus Estate. That being said, the lack of engine noise does serve to highlight the road noise generated by the model’s wheels, a set of 235-width Michelin Pilot Sport 4Ss (with a compound bespoke to the ST range) on optional 19-inch alloys.

And with no optional Continuously Controlled Damping (CCD) fitted to our test car – meaning it has two rather than three damper tubes and lacks the software to actively counter road imperfections – the ride is unquestionably firmer than its siblings. 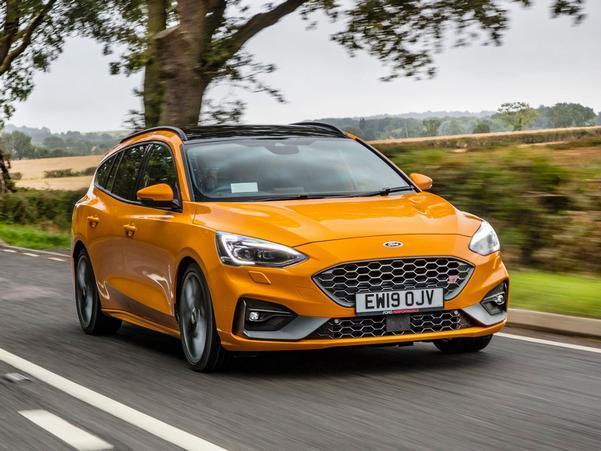 That’s virtually a given when you factor a 40kg weight penalty (compared to the petrol ST) into the passively damped chassis, and results in a busy response to secondary intrusions. That said, there’s sufficient give over bigger lumps and bumps for the car to resist any accusation of outright brittleness. 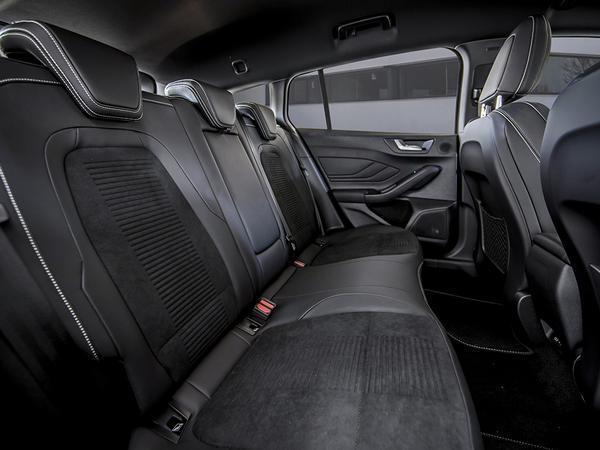 The pay-off for its determined bent is obvious enough, too. Stop driving the ST like a diesel estate and it grows into its configuration. Really work the engine through its meaty mid-range and the induction rumble starts to convince you that the model is actually deserving of its very fast steering.

At two turns lock to lock – 15 per cent quicker than non-STs – it gives the Focus’s front end a keenness that no other car in this segment can claim to match, and even the ride seems to smooth out at higher speeds. 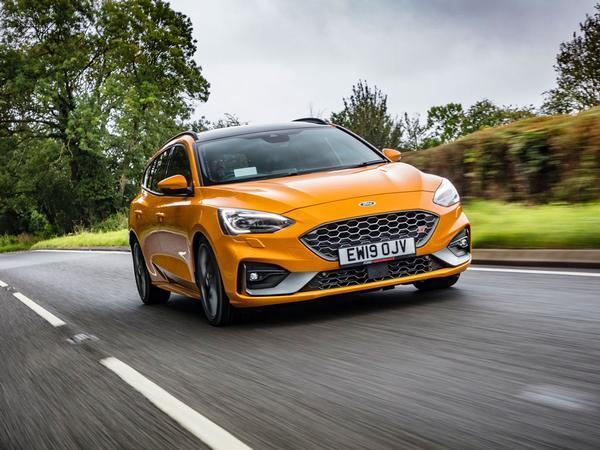 Somewhat counter intuitively, the diesel hands more control to the driver than the petrol when in Sport and Race modes, as it doesn’t have auto blipping on downshifts – which you can’t turn off in the EcoBoost model.

Those drive settings still prevent you from separating out the steering assistance from the powertrain, however, so as in the petrol, if you want a faster throttle and more noise, you’re stuck with a weightier helm. It’s not overly heavy, mind, but typical of EPAS in that it adds nothing but effort into the equation so tends to detract from the feeling of nimbleness. 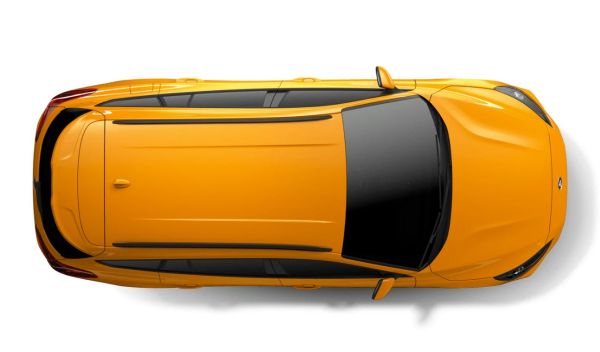 Be that as it may, the diesel ST’s saving grace are those shared chassis settings. Even in nose-heavy, slower guise, it displays a familiar eagerness. The wagon mixes a positive front end with stability, so you can really hammer along a route, and has not lost its capacity for slight over rotation on a trailed brake. Without question, it is more agile than Skoda’s equivalent. 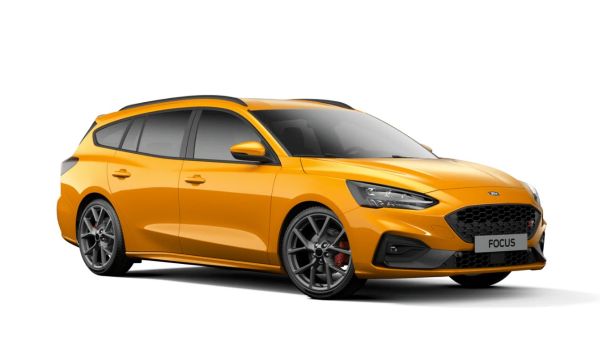 Is that enough to give Ford an upper hand in a class where performance isn’t necessarily the defining characteristic? Given the ST’s £3.5k premium and the vRS’s modest superiority in economy and basic ride comfort, it would be hard to recommend the Focus as a superior all-court solution to the job of being a moderately quick estate car.

But if you’re specifically after a practical, high-mile-capable wagon with enough handling smarts to raise the odd smile, we’d put the ST a nose ahead of the buttoned-down Octavia. How’s that for logic…