2022 Ford Mondeo Not Coming To Europe: Official!
The Blue Oval tells us it won’t bring the midsize sedan to the Old Continent.

Quelle surprise – the new Ford Mondeo unveiled yesterday in China won’t be coming to Europe where sales of midsize sedans in the mainstream segment have been declining for years. Our colleagues at Motor1.com Germany got in touch with the Blue Oval’s local branch and a spokesperson confirmed the “Mondeo” nameplate will only continue in the People’s Republic.

As originally announced nearly a year ago, the Euro-spec Mondeo in all three body styles (liftback, sedan, wagon) will be officially retired in March when production at the factory in Valencia will come to an end. Meanwhile, it’s one of the oldest models in its segment considering the car has been around for a decade. The moniker will be phased out in Europe after 30 years as Ford replaced the Sierra back in 1992. 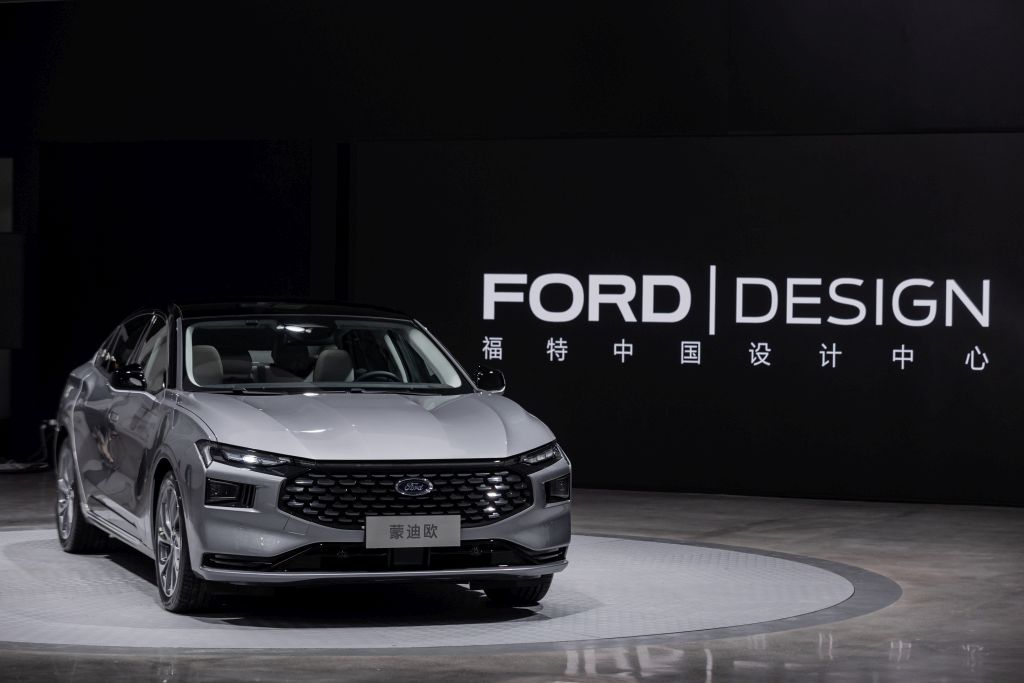 As Ford’s famous global sedan for almost 30 years, Mondeo has become a well-known and respected nameplate worldwide. Since its launch in China in 2002,Mondeo has built a reputation with local consumers as a stylish and sporty mid-sized sedan packed with pioneering technologies. The Ford design team knew that for the next-generation Mondeo to succeed in China, it would need to continue these traditions, as well as feature the craftsmanship and design aesthetic expected by tech savvy and sophisticated Chinese buyers.

“To design the next generation of a well-known nameplate such as Mondeo was a privilege and a challenge for our team,” said Maurizio Tocco, Chief Designer, Ford Motor Company. “We wanted to respect and acknowledge the history which had come before us while elevating the customers’ experience to the next level. The starting point of the design is always the customer and looking for innovative ways to incorporate what they need and want into the design.” 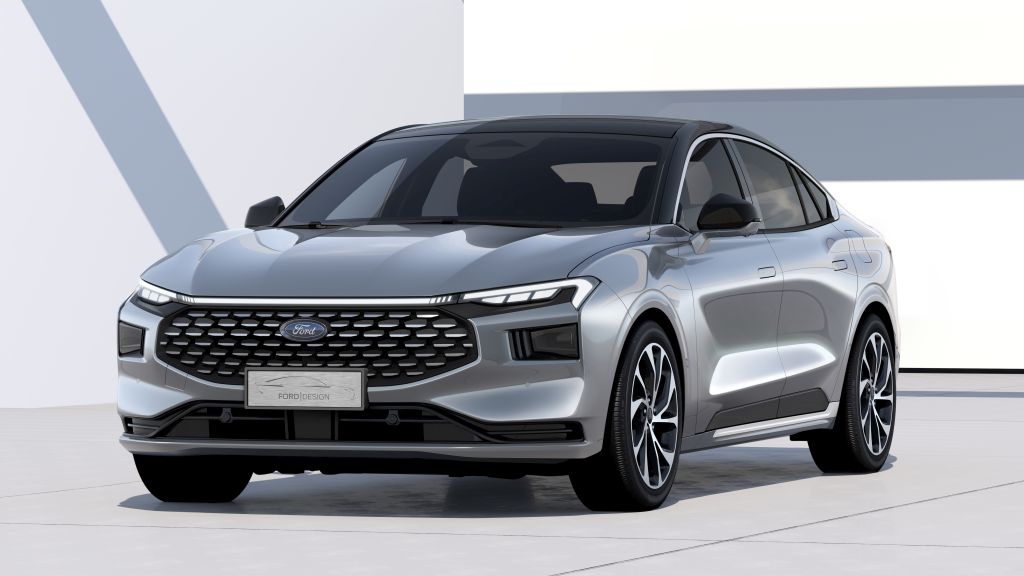 “Progressive Energy in Strength” at Heart of Mondeo Design

“Progressive Energy in Strength” is the new design philosophy developed by Ford for China. Based on the rich heritage of Ford and its icon designs, it incorporates extensive research by the brand into Chinese customers’ aesthetic sensibility and preferences. It embodies three fundamental expressional design principles to be achieved for Mondeo and all Ford designs for China. These are to be “commanding,” “agile” and “responsive.” 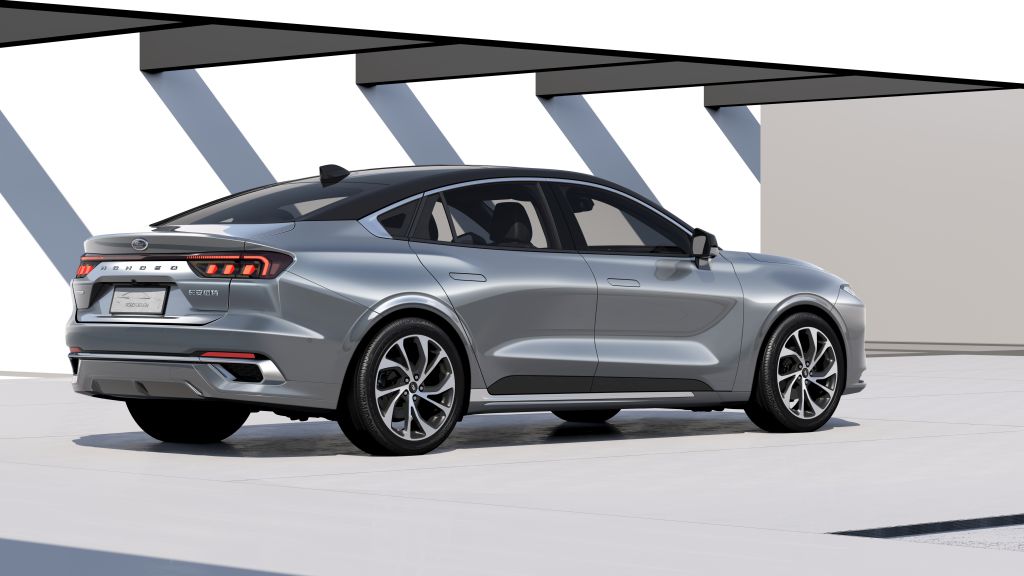 The sporty new sedan demonstrates these elements throughout its exterior design and distinctive coupe aesthetic. In profile, this starts with the forward-leaning attitude of Mondeo’s front, which immediately expresses agility with confidence. A long, accelerated hood line flows through to the rear, where the bold and speedy shoulder line and fast departure of the roofline converge in the gentle up-flick of the subtle integrated rear spoiler. The lower doors are highly sculptured, with flowing concave scallops appearing to change depth and form, depending on the play of light, and have a distinct performance feel. 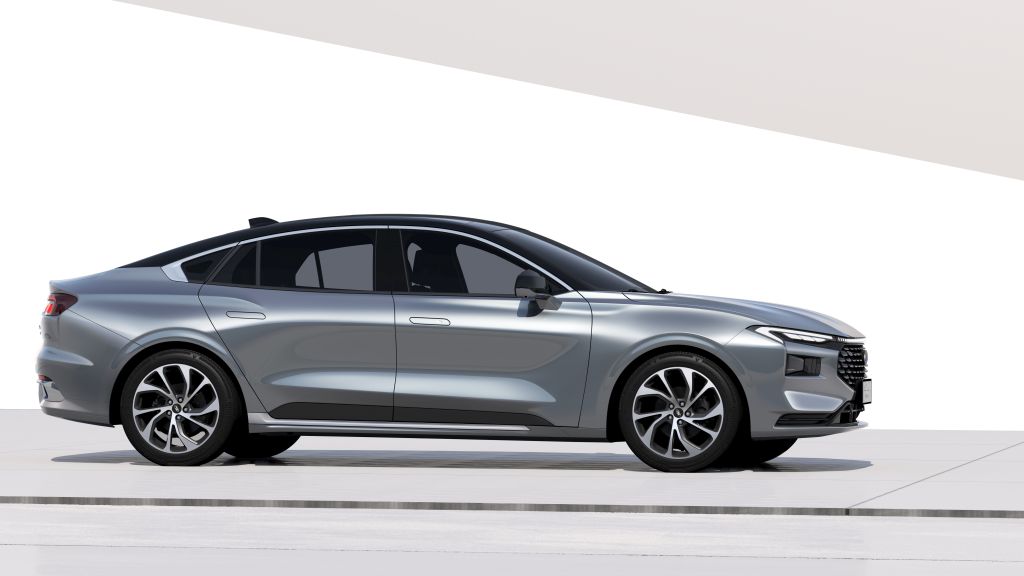 This agility continues in Mondeo’s confident and sporty front-end treatment. Coast-to-coast lighting and defined corners accentuate Mondeo’s increased width and accentuate its sprung stance. The signature lighting elements perfectly balance the unique grille of active parametric cells, framed at the sides and below by strong graphics and muscular surface language. Flowing back from the grille and lights, the distinct sculptured graphics on the hood give it a subtle power bulge and commanding Ford performance feel. 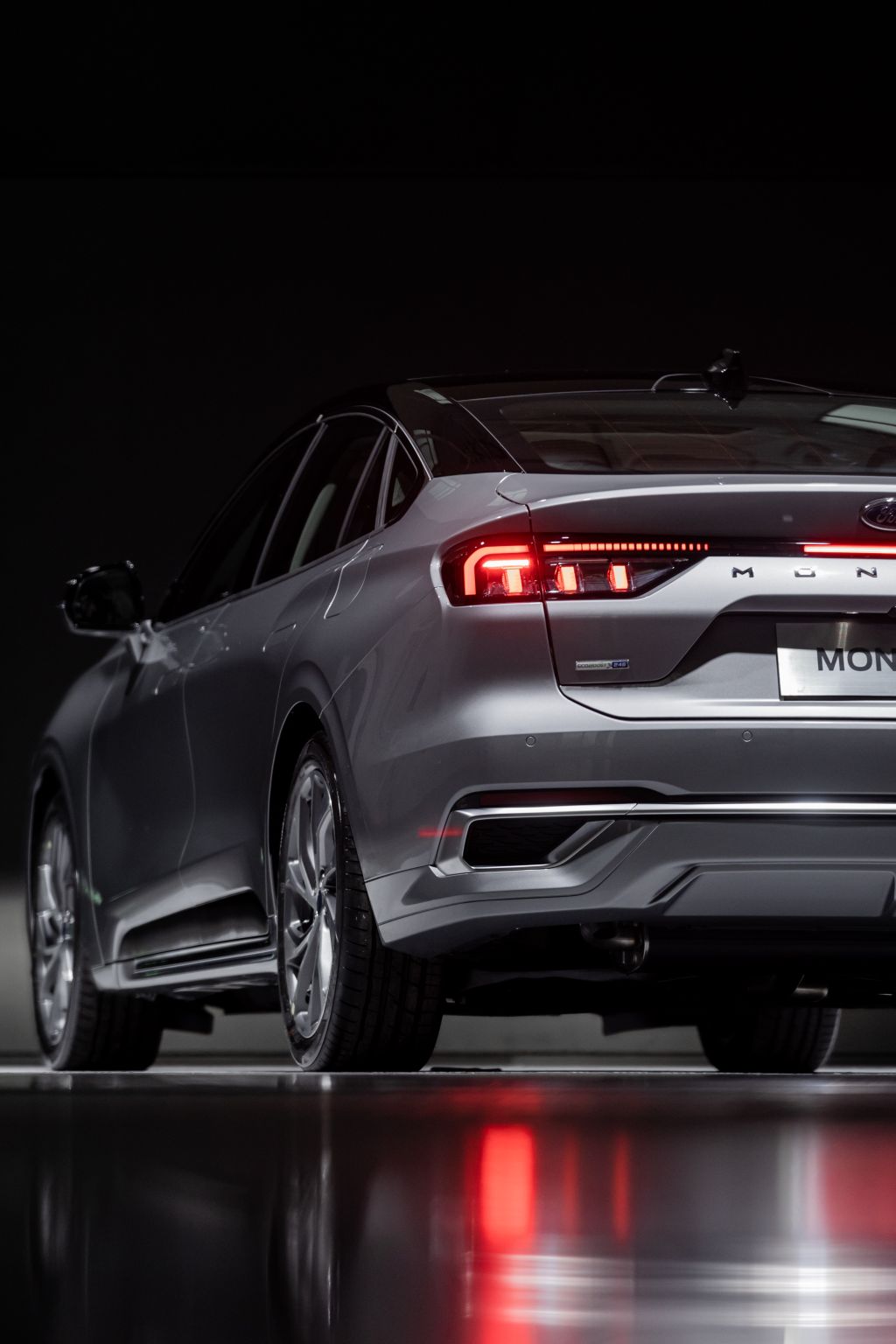 The salute to Ford heritage continues at the rear, where the unique taillights evoke iconic Ford performance DNA. The lamps are framed by a gloss black coast-to-coast element that again accentuates Mondeo’s width. The sedan is now23mm wider and 63 mm longer than the previous model. This makes for an even more generous rear passenger area flanked between the sporty lines and coupe-like roofline. 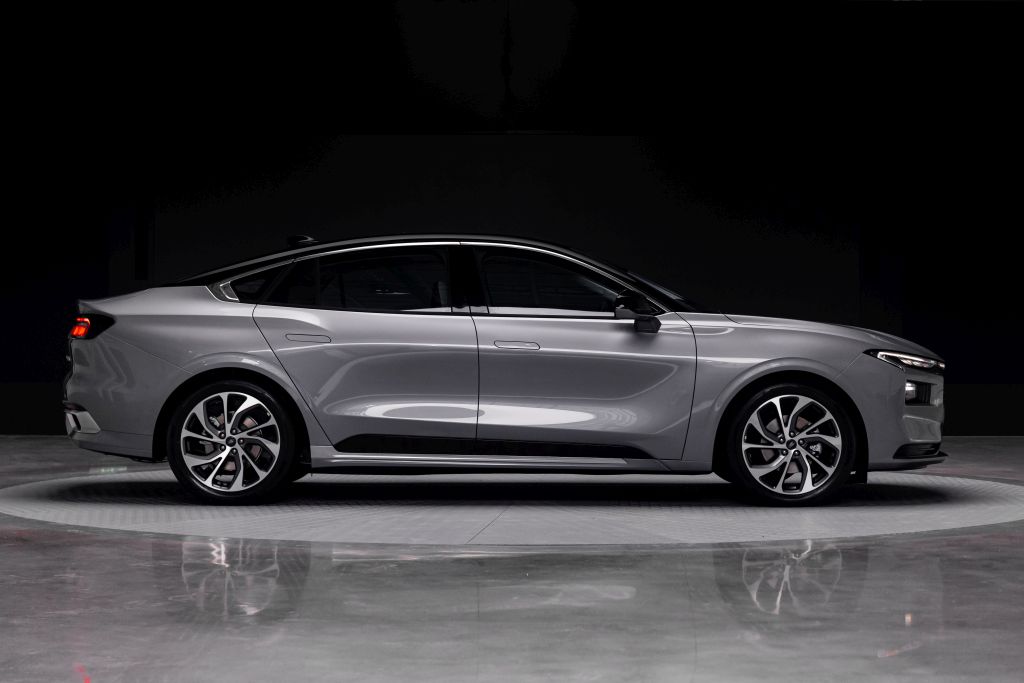 Ford’s deep local research revealed Chinese consumers value vehicles that embrace responsive design elements. These are seen throughout the all-new Mondeo, including in the exterior design. The flush-fitting door handles that help give the car its streamlined looks respond by deploying to passenger demand, while the rear Ford badge is touch sensitive and cleverly activates the rear liftgate opening. Perhaps the most dynamic of these responsive elements is the way the animated full-width lighting and individual parametric cells of Mondeo’s front grille move to acknowledge drivers as they approach the vehicle. 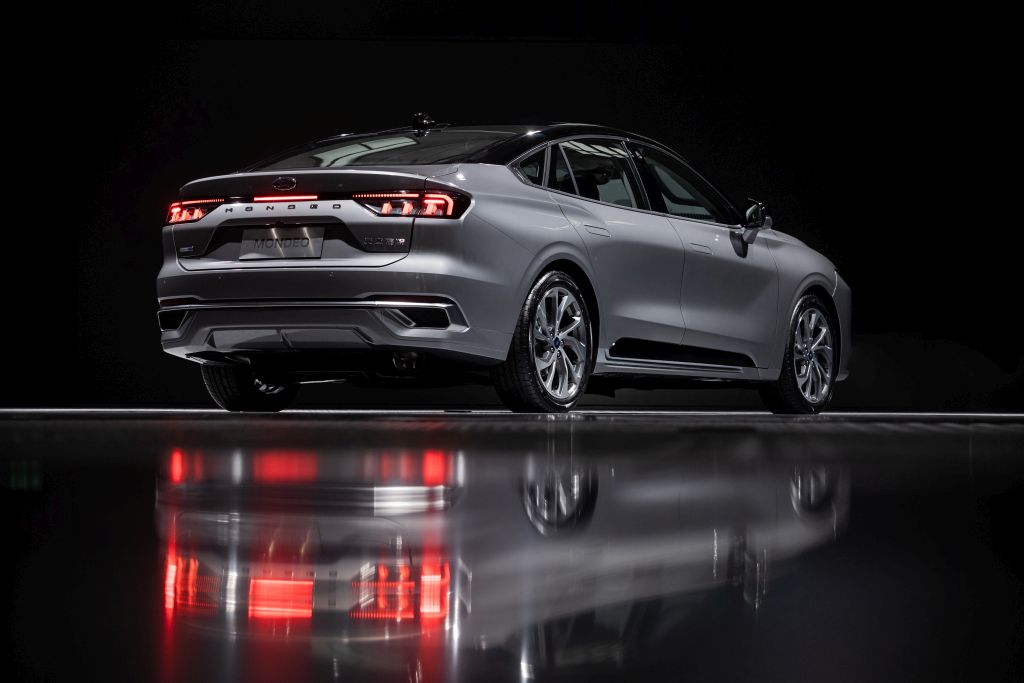 “These pioneering design details highlight the ‘responsive’ aspect of our new designs, while underlining our Chinese customers’ preference for advanced tech expression and sophisticated and refined craftsmanship,” said Max Wolff, Design Director of Ford China and International Markets Group. “Our goal was to create an aerodynamic, forwardmoving form that expresses energy and strength while providing space and comfort. The strong, width-emphasizing form, signature frontal graphics and powerful stance work together to give our vehicles a confident presence. This is the ‘Daqi-ness’ that Chinese customers appreciate.” 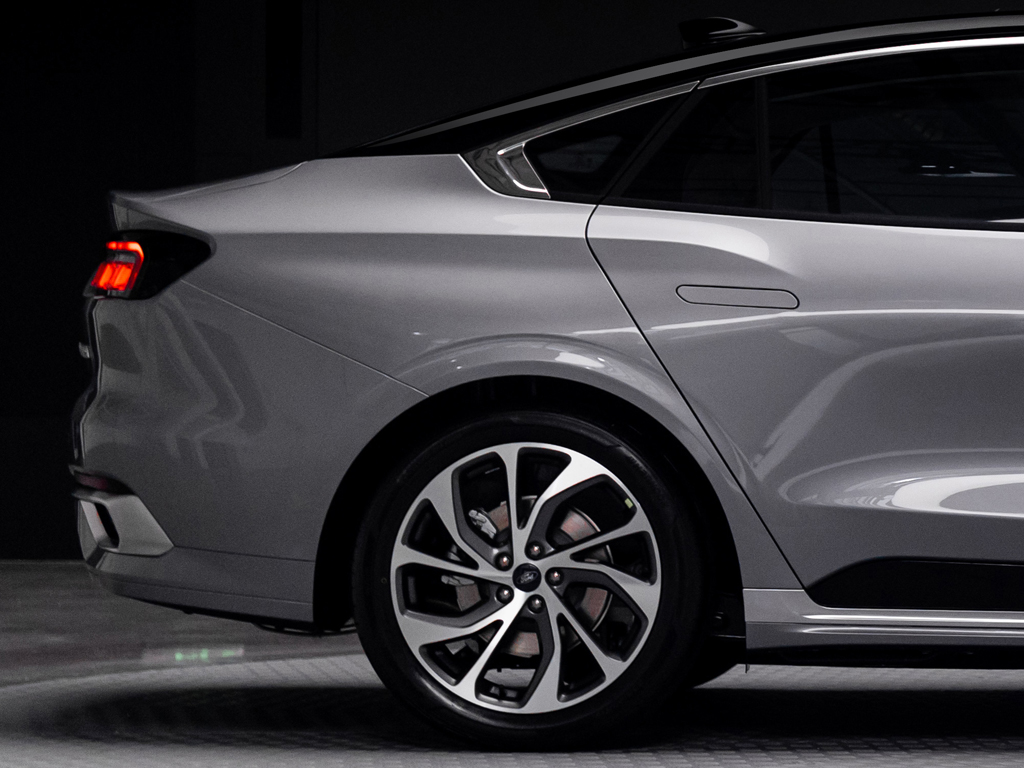 The all-new Mondeo vehicle program was led by the Ford China team collaborating globally and is indicative of the “Best of Ford, best of China” roadmap which continues to deliver pioneering and innovative models for the world’s largest automotive market. The all-new Mondeo will be built by Changan Ford and delivered to Chinese customers in 2022.