Mat Jackson and Andrew Jordan shared the spoils in Hampshire with the Kent-based outfit delivering a commanding performance to extend its Independent Teams’ Championship lead and close the gap on the Overall Championship leaders. There were early signs of a strong weekend during Saturday morning’s free practice sessions with both Motorbase Focus STs showing excellent pace at the top of the timing sheets. Qualifying sadly didn’t produce the same results and both Jordan and Jackson were left somewhat deflated ending the session in P8 and P14 respectively.

AJ immediately showed his intent as Sunday’s first race got underway, charging off the line to take MG pair Sutton and Cook as they entered the first corner. A frantic race ensued as the laps unfolded with Jordan’s Pirtek-backed Focus managing to avoid the chaos as the lead pack battled – trading positions and paintwork along the way. Having managed to work his way up into the top 10 in spite of carrying 39kg of ballast, Jackson’s charge was regrettably cut short with a spectacular puncture as the #7 Focus headed into Club on lap 10. Despite a perfectly executed pit-stop by the Motorbase crew, DUO-backed Jackson had to re-join at the back of the pack and could only muster a P21 finish. Jordan meanwhile managed to avoid a huge race-ending melee involving the lead pack on lap 11, taking full advantage of the opportunity to move the #77 Focus up into 3rd to claim his maiden podium for the Motorbase-run squad. With race officials and Dunlop announcing new race distances shortened to 12 laps for the remaining two races, Jordan made his first move for the lead from lights out. Moving past Ingram’s Toyota to take 2nd Jordan then set his sights on race leader Morgan whilst fending off challenges from Collards’ lighter BMW. With 57kgs of ballast on-board, Jordan played the long-game keeping the pressure on Morgan whilst preserving his tyres before making his move on the Mercedes on lap 11 to take the race lead securing his first race win since joining the Motorbase squad and his first race win since 2014. An outstanding performance from Jackson saw the #7 Focus make up an incredible 12 places on the grid, earning the 35-year-old an impressive 8th place finish and further points for the Motorbase championship campaign. 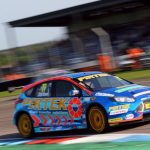 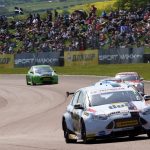 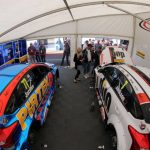 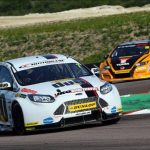 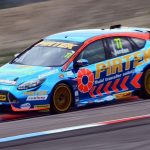 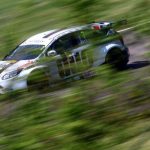 The reverse grid draw for the final race of the day resulted in a front row start for Jackson in P2 with team-mate Jordan dropping into P9 with 75kg on-board. Jackson stormed off the line and straight past Welch to steal the race lead with the #7 Focus controlling the race to the chequered flag; collecting a 2nd race win of the weekend for the Motorbase squad and Jackson’s 2nd of the season. Unfortunately a reverse of fortunes for Jordan in the final race ended on a low point with the #77 Focus picking up a rear puncture on lap 7 eventually crossing the line in P21. 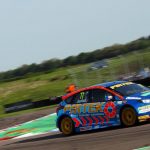 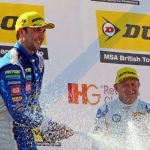 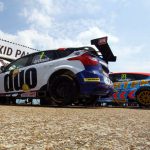 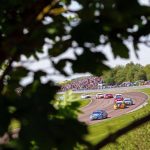 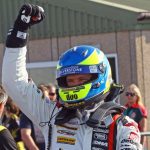 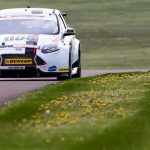 Team Manager Oly Collins:
“What a day! A fantastic double win for Motorbase shared between Andrew and Mat is a brilliant result for the team all round. They both drove outstandingly well all day. I’m really pleased for Andrew getting his first win with us and Mat’s win was the icing on the cake. We knew we would be strong in the races today and two wins repaid the whole team’s hard work. Now we can’t wait for Oulton!”

#77 Driver Andrew Jordan:
“It feels great to be back on the top step. I knew that when the time was right we’d get the win. Yesterday we rolled out on the pace in free practice and although we didn’t get the qualifying result we wanted we knew we had the race pace so to be able to back that up with a podium and race win was brilliant.
“For me to get the first win with Motorbase feels really special. I genuinely can’t say enough about how welcome I’ve been made to feel coming into the team, even when we had a tough weekend at Donington they supported me so it’s great to be able to repay that with a win today. I’m in a happy place. I feel that we have the momentum behind us now that we can build on.”

#7 Driver Mat Jackson:
“We struggled a bit at the start of the weekend in qualifying and didn’t really manage to hook up a fast lap which put us on the back foot. Race one started well and we were working our way up until we picked up a puncture. Race 2 was better, I got held up for a good chunk of the race but the car felt good and we managed to fight our way up to 8th and then thankfully got a lucky break with the reversed grid.
“To get the second win of the day for Motorbase felt great, the hard work everyone puts in is paying off and we’re in a good place. The car’s performing well and we just need to keep clocking up the points and we’re all looking forward to going into Oulton Park in the Championship fight.”