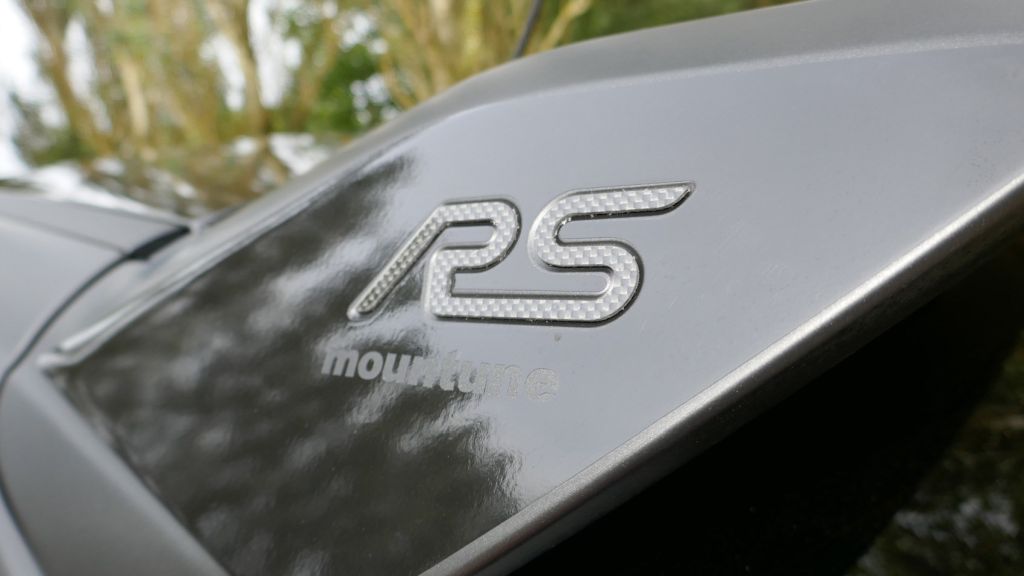 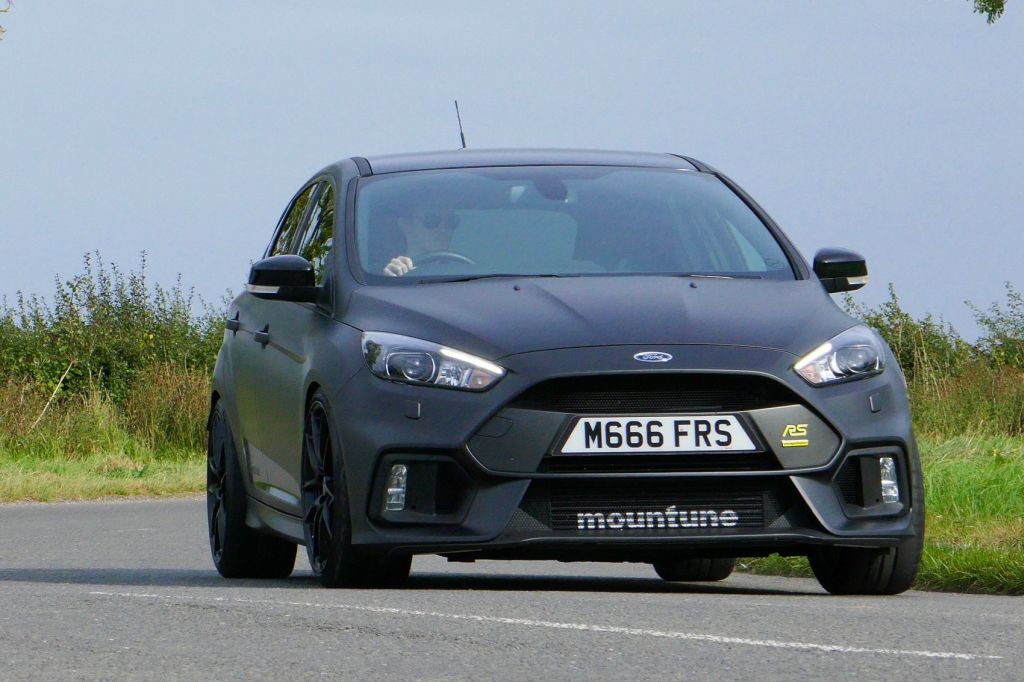 ‘Alright mate? How fast does this go then? I could hear it coming a mile away.’

Get used to comments like that if you want to overdose your hot hatch on Mountune-branded steroids. The performance company has managed to squeeze even more shove out of the Ford Focus RS’s 2.3-litre turbo four, and developed the M400 upgrade kit for hot Ford fans to enjoy themselves all the more.

This particular SR-71 Blackbird-spec rally-car-for-the-road is Mountune’s own car for showing off the new M400 kit’s power, and we’ve been driving it. 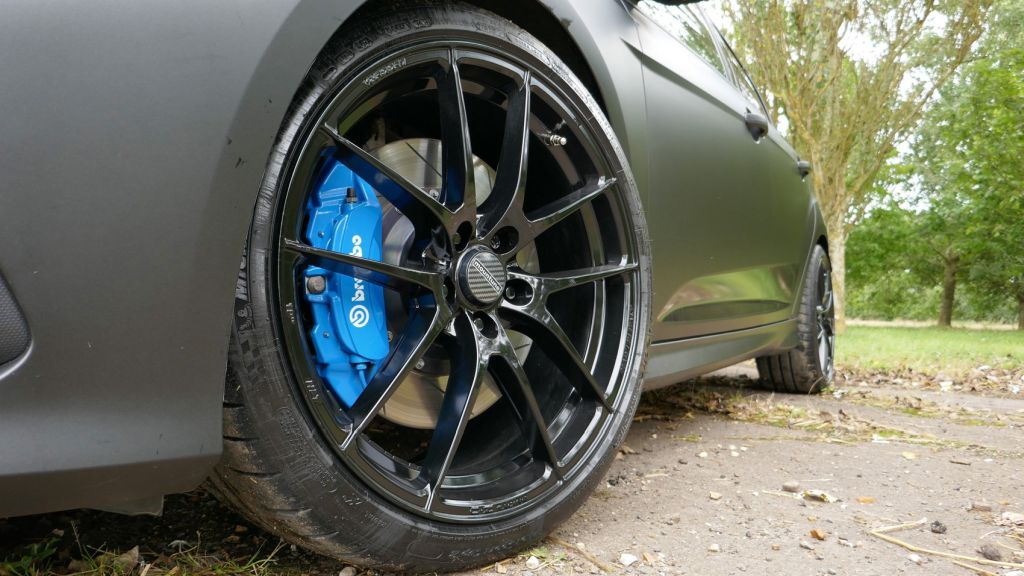 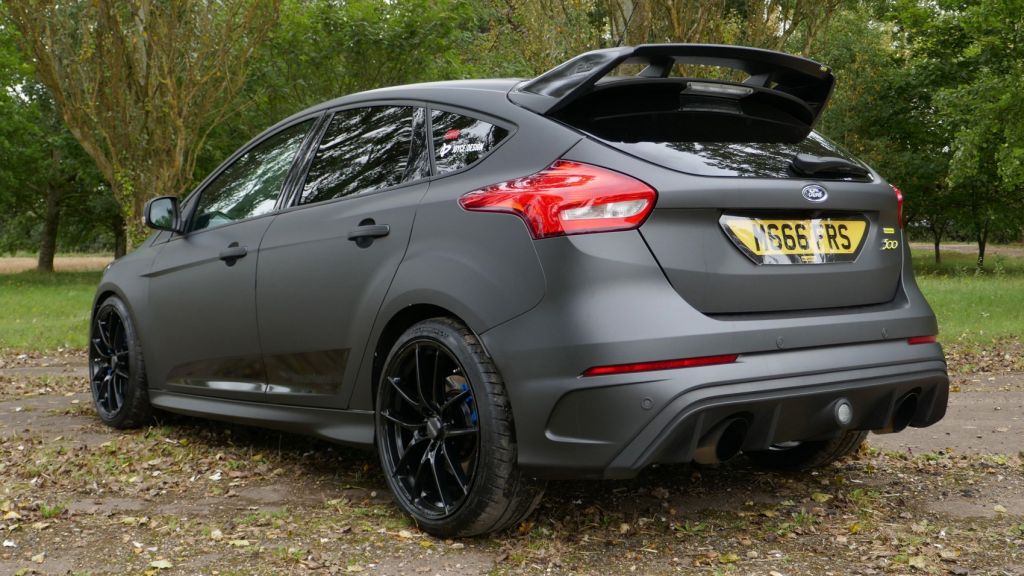 In short, all of these uprated performance parts add 49bhp and 92lb ft of torque. You have to bear in mind, though, that the M400 kit isn’t endorsed by Ford (unlike the FP375 kit we tested earlier in 2017), so it could void your warranty.

Our M666 FRS show car, straight from Mountune’s Brentwood facility, also came fitted with a Quaife front differential, sports springs, 19-inch OZ ‘m-Spec’ alloys, Michelin Pilot Sport Cup 2 tyres and that badass/chavvy/aggressive/OTT (delete where appropriate) black wrap among other small upgrades. In fact, all in, the show car is priced to the tune of £42,554.92, not including the matte black wrap from Joyce Design.

The wrap certainly whipped up discussion within the CAR team, with, um… younger staff members reacting more positively. It also garnered even more attention from passers-by than a regular Focus RS. If you’re a sucker for attention, drive one of these. 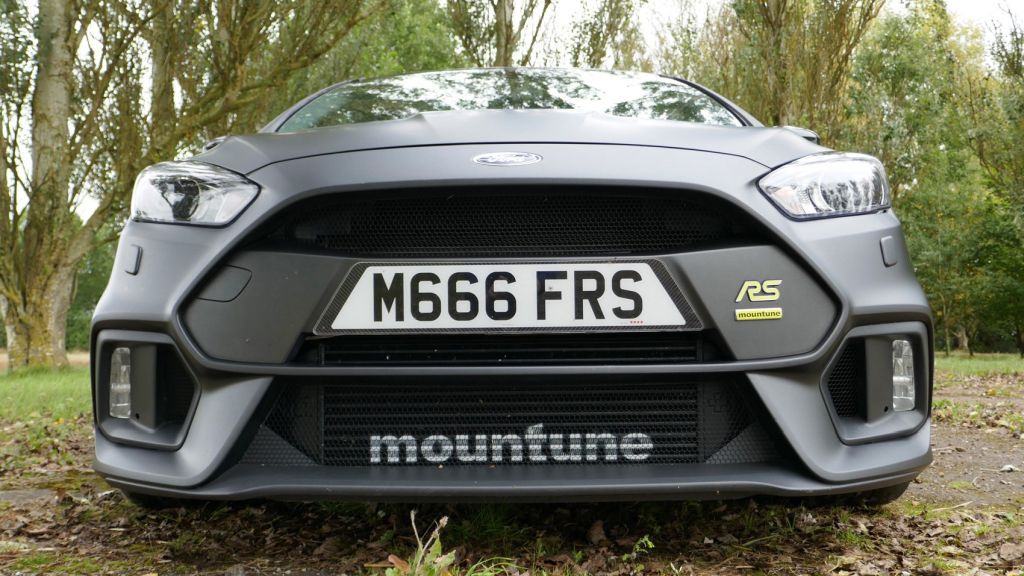 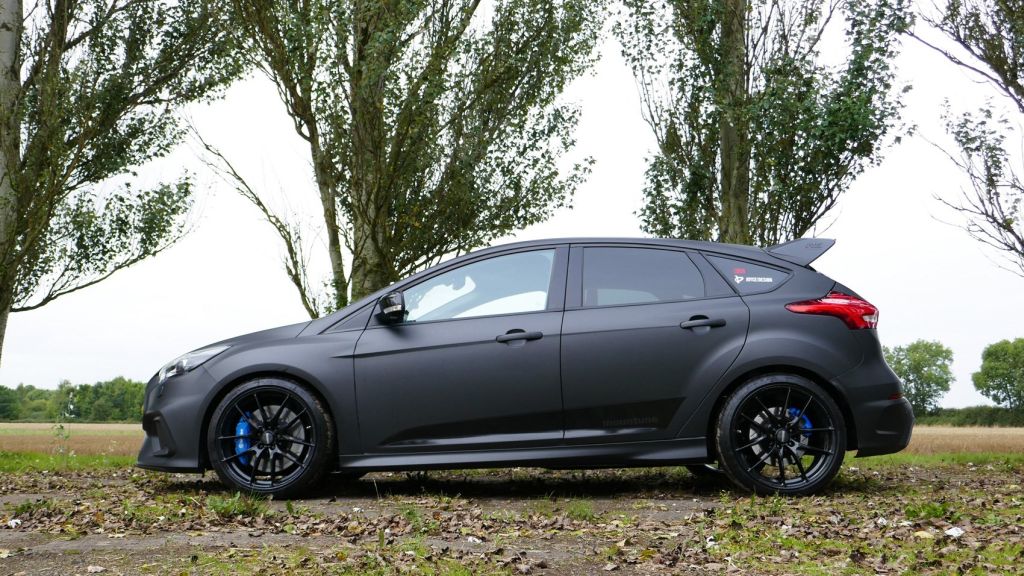 Does the M400 kit make a difference?

Not initially, if you’re only just getting behind the wheel.

If you’re pottering about in an urban environment the M400 still feels every bit as RS-ish to drive slowly. The gearbox still snicks into gear beautifully and the clutch pedal is still excellently weighted and bites early, but the fidgety ride quality is downright irritating and even when you’re stationary, you need to be a serious Tai Chi enthusiast to plumb a postcode into the nav without bursting a blood vessel through impatience.

But you, CAR reader, are here to find out how the M400 feels on maximum attack, right? Well, it’s something of a sensation. Mountune hasn’t benchmarked acceleration figures for the M400, but subjectively it feels markedly quicker to 62mph than the regular Focus RS. Plant your foot to the floor and the electrifying acceleration and rally car soundtrack will make you sure of it.

The low-down torque availability is the star of the show. There’s 92lb ft extra here than the standard car, which is truly welcome; the shove is more accessible through a wider rev band, and there’s less of a step-change halfway up the tachometer when the turbo is up to full pressure.

The cat-back exhaust is allowed to breathe more freely in Sport, and is truly deafening to the point that your mates will hear you coming from 30 miles away with a cacophony of snaps, crackles and pops. Makes for hilarious B-road time attacks, but will not make you popular in the neighbourhood if you’re a ‘supermarket car park at 2am’ type. 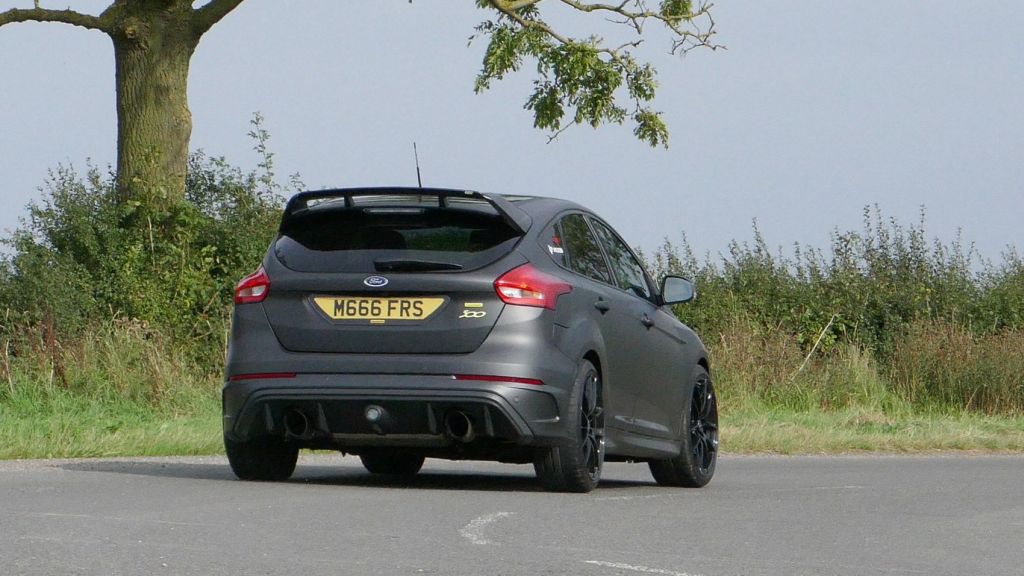 What about the handling?

Before we go into that, you have to remember that our test car has had a whole host of extra upgrades that don’t come with the M400 pack.

The standard RS, with its all-wheel drive, torque vectoring and traction control wizardry can leave performance car giants floundering on a back road. It’s such a confidence-inspiring car that it allows even novices to helm it like Carlos Sainz or Jari-Matti Latvala on a Monte Carlo tarmac stage.

This M400, with its sticky Pilot Sport Cup 2s and Quaife limited-slip front diff only amplifies that. The torque is shifted away from the spinning wheel and sent elsewhere to manage the traction. That means turn-in and steering response can be sharper than a regular RS, to the point of nervousness but means you can attack bends at speeds your senses might have trouble computing. 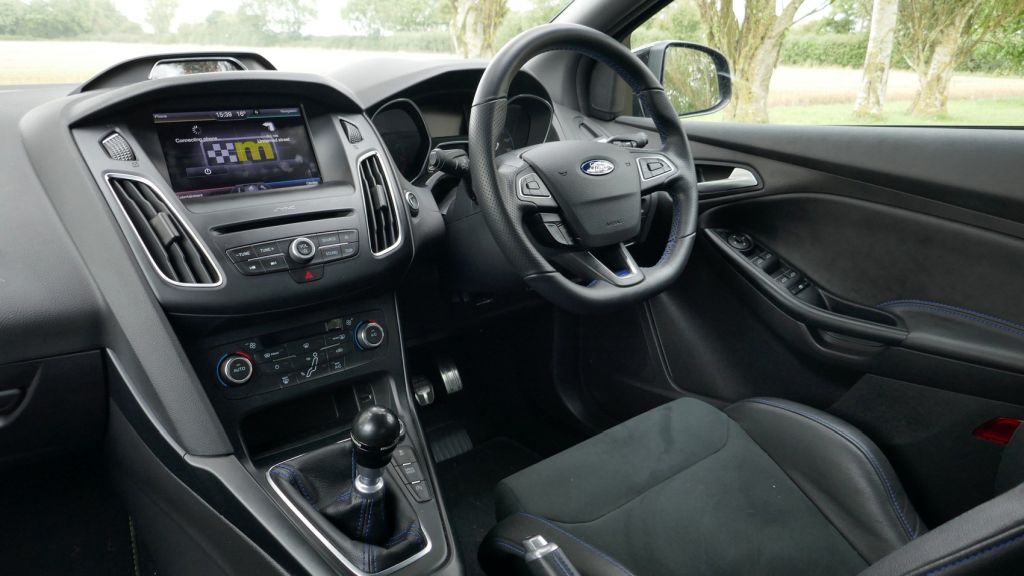 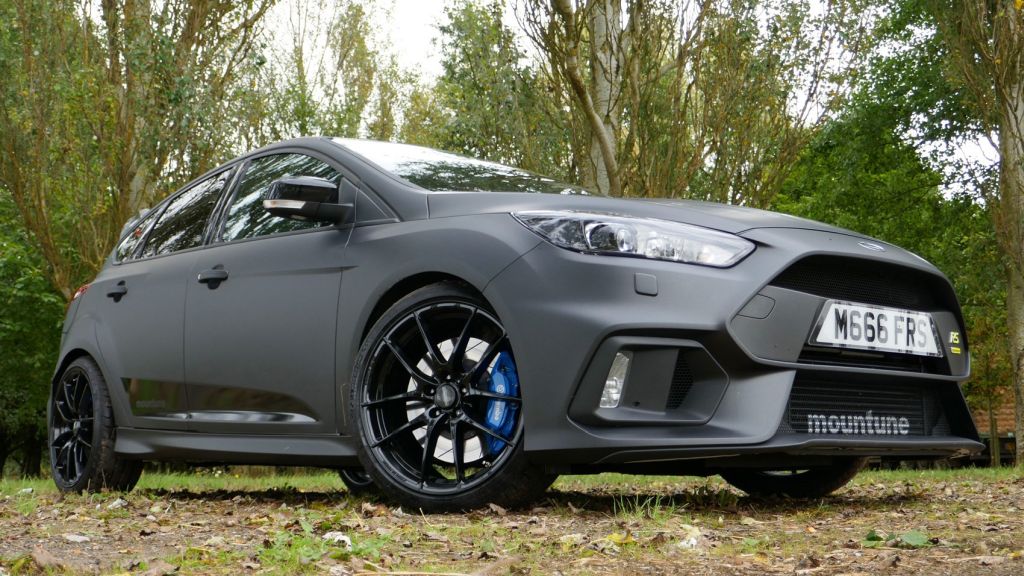 Anything else I should know?

The Mountune kit does nothing to the interior, so you’re still left with Recaro seats with fixed bolsters so sharp they’ll bruise your thighs if you hop in too vigorously, you still sit too high and you’re greeted by a functional if slightly drab dashboard.

Our show car provided gentle hints that you’re in something special here, though, as evidenced by the logo graphic on the SYNC 2 infotainment system (not the latest SYNC 3 like newer Fords), black ball gearknob and Mountune-branded floormats. You can add a few more interior customisation bits in the Mountune store if you’re bothered about that sort of thing.

If you wanted to benchmark your M400, there’s a ‘Dyno Mode’ within the mTune handset that deactivates drive to the rear wheels. Oh, and expect to get to know your local forecourt attendant intimately, too: our rather unscientific fuel economy measurement was circling around the low 20s during our time with M666 FRS. 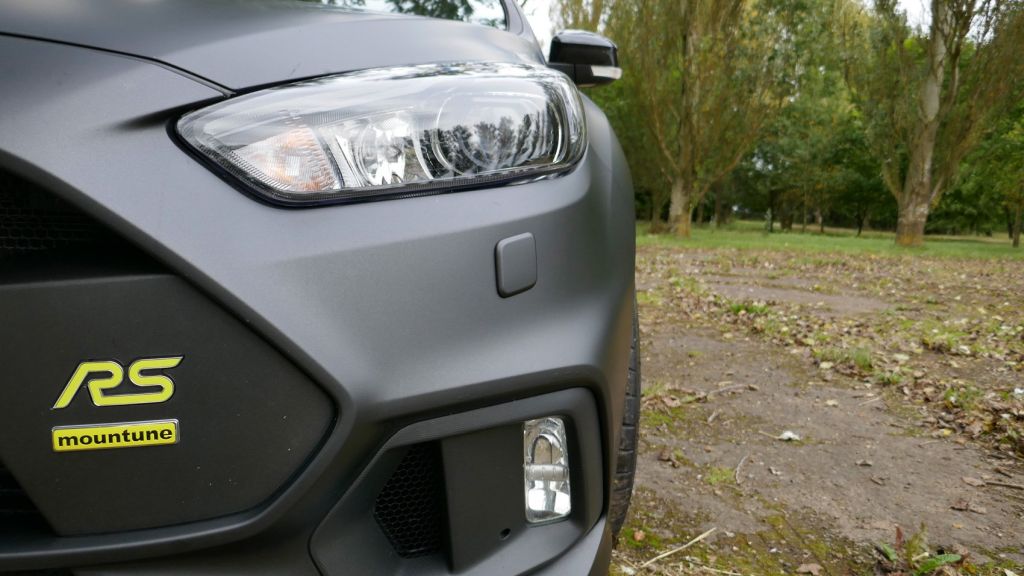 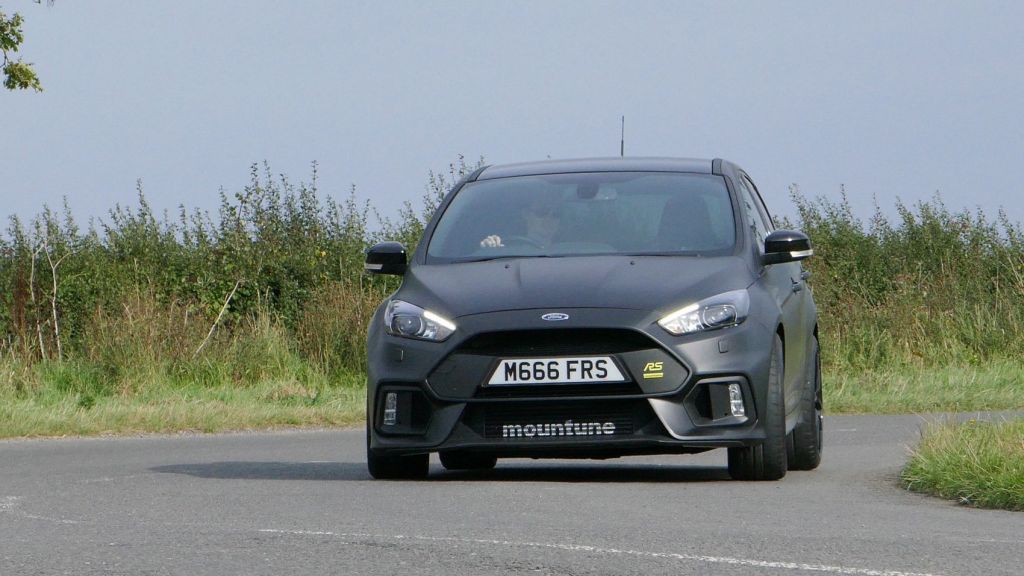 As much as we’d love to, we can’t quite stretch to giving the M400 the full five stars.

The extra torque makes the RS’s available shove more accessible and its physics-bending handling prowess continues to boggle the mind. Plus, the fact that you can have a 400 metric horsepower hot hatch for around £5k less than a Mercedes-AMG A45 and £10k less than an Audi RS3 will keep you feeling smug.

But the fact the M400 kit hasn’t (yet) been approved under Ford’s warranty makes us a little cautious to wholeheartedly recommend it. Plus, you have to be dedicated to drive a lunatic hyper hatch with a lumpy low-speed ride and an uncompromisingly loud exhaust every day and not tire of it now and then. We love it, but it’s not without its caveats.