Ford has sent the 2016 Mustang SVT / GT350 on a European vacation as our spies have caught the model undergoing testing on the Nürburgring. Dressed in a distinctive diamond camouflage, the high-performance model is bound to draw attention as it features an aerodynamic body kit and a ventilated hood. The sporty styling continues out back as there’s an aggressive rear diffuser which is flanked by a four tailpipe exhaust system. 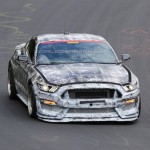 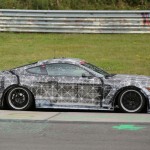 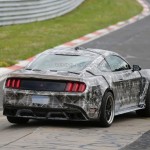 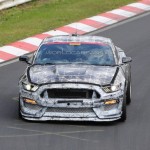 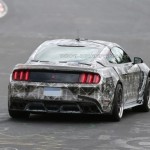 Ford has been relatively quiet about the model but it is being developed by their Special Vehicle Team (aka SVT) and could eschew the Shelby name as a result.

The car’s engine remains a bit of a mystery but it could use an upgraded version or variant of the 5.0-liter V8 that powers the Mustang GT. While there’s no words on specifications, our spies said the car was “very loud” and “looked pretty fast” on its first lap.