Ford’s brand new hot hatchback is powered by a 2.3-litre Ecoboost engine with 345bhp, and we’ve been for a first ride. “I worked my ass off to make it do that,” says the man to my left. ‘It’ is the hot hatch of the moment, the brand-new Ford Focus RS. And the man talking about it – driving it, typically enthusiastically – is David Put, vehicle dynamics specialist of Ford of Europe.

The grinning Belgian has done a big chunk of the dynamic tuning of the new RS, and right now he’s flicking the car around the damp curves of the legendary ‘Track 7’ handling circuit at Ford’s Lommel proving ground. It looks like fun – a lot of fun, actually.

The car is cornering flat and fast, pulling with huge torque and proper sports car pace down the short straights, and sounding all growly and interesting. That much you don’t have to be in the driver’s seat to tell. But watching Put’s measured inputs carefully, you can see – and feel – exactly what he’s so chuffed about. The car’s initial handling response and lateral grip levels look considerable; David’s not having to do much at all to get the front wheels running towards apex after apex. But it’s what happens mid-corner, as he begins to feed power back in, that really surprises. There’s a small but perceptible nudge from the outside rear wheel; a friendly little tweak of not just traction but handling impetus, making the car both speed up and turn in at the same time.

Where other all-paw hatches would be beginning to lose their poise, bothering their ESP and running wide as the transmission sends drive first to the harder-working front wheels, the Focus stays neutral. And then it begins to blend into power-on oversteer, as Put unwinds the steering angle and applies a delicate correction. Four-wheel-drive hot hatchbacks just don’t do that – not in this tester’s experience. You can chuck a VW Golf R or a Mercedes A45 AMG into a transient slide by unloading the rear axle, but what happens when you come back onto the pedal tends to be all very boring and predictable.

This – it would seem from the passenger seat, at any rate, and judging by both the smile on my co-driver’s face and what the ‘seat of my pants’ is telling me – is a four-wheel-drive performance hatch that you can accelerate into a powerslide – that you can steer on the throttle, in other words, like a proper rear-driver. Praise be.

My need to drive the new Focus RS only gets more urgent after that revelation, but it isn’t going to be addressed today. We’re here for an advanced passenger-seat preview only – and an up-close-and-personal review on the engineering effort that has gone into one of the most eagerly anticipated affordable driver’s cars of the past few years.

Among the first things to be announced about this new hot Focus was that it’d be four-wheel drive – just like its 1990s forebear, the memorable Escort RS Cosworth. That was among the very first decisions taken by the Ford Performance engineering team, and you can read all about the pioneering technology behind the drive system here. 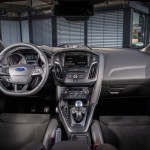 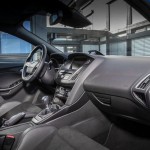 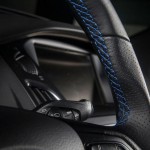 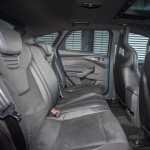 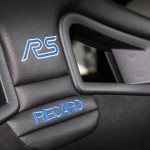 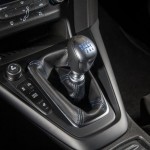 We knew back at the Geneva motor show this year that the four-wheel drive system in question would have a ‘drift’ mode – and that it would therefore have to be something inherently more trick than the Haldex-coupled norm. We also knew that the RS would develop a formidable-sounding 345bhp.

What wasn’t known was that Ford’s prototypes weren’t quite making that much power back then. The target has been achieved since, of course; it had to be. But using Ford’s 2.3-litre Ecoboost Mustang engine as a basis, it has taken a whole new Cosworth-milled cylinder head and gasket, new cylinder liners, new induction and exhaust systems, a completely new twin-scroll turbocharger and the largest radiator that could be squeezed into the front of the Focus’s engine bay to achieve it.

Ford freely admits that its emphasis was on delivering the car to market for an outstanding price as much as anything – and that some opportunities for saving weight have been passed up. So the car weighs a hefty 1599kg wet, including the EU’s mandatory 75kg for driver and luggage. The four-wheel drive system contributes an undisclosed amount of mass compared with front-wheel drive.

A dual-clutch automatic gearbox would have brought the 0-62mph sprint down a bit from where it currently sits (4.7sec), but would also have added another 30kg to the car – not to mention four figures to the asking price. Besides which, if you option the 19in forged wheels and Michelin Pilot Sport Cup 2 tyres on the car, the Focus RS is considerably faster-accelerating than the manufacturer’s claim. 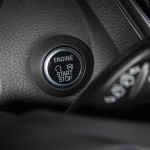 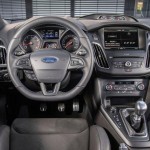 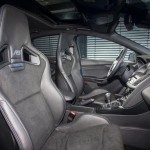 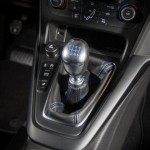 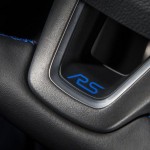 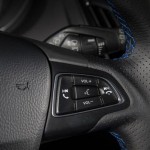 The four-wheel drive system forced a switch to a different C1-platform rear subframe, which was originally developed some years ago for Volvo – but in order to deliver the rigidity required to handle the forces put through the rear end of the Focus, it’s been braced against the body-in-white in three separate directions on each side.

Above that, the car’s body structure itself has also been reinforced. If you could lift the boot lining, you’d see a thick band of steel designed into the sheet metal, running between the rear suspension towers, that Ford has christened a ‘lion’s foot’. Local torsional stiffness has been increased by as much as 200%.

The RS has four drive modes, ranging from Normal at the tame end of the dynamic spectrum to Drift at the wilder end. As David cycles through them, I can feel the dual-rate Tenneco dampers firming up – the ride having started out firmer than, say, a VW Golf R, but still entirely possible to live with. It ends up probably too firm for British B-roads but about perfect for a fairly smooth, low-kerbed track.

Although the RS runs with more negative camber on its front axle than the Focus ST, and with 30% stiffer springs, its overall ride height is about the same. Its power steering is slightly quicker overall than the ST’s, says David – but they’ve junked the variable ratio of the ST for a more predictable fixed one. “With the handling effect of the four-wheel drive system, you just don’t need that extra help to get the car turned in,” explains our man. 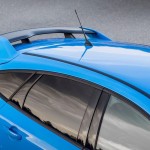 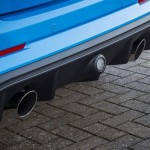 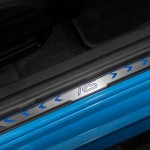 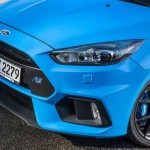 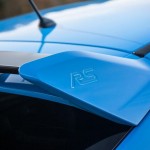 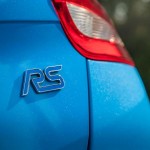 From the passenger seat, it’s impossible to be certain about exactly how crisp that turn-in really is and how much adjusting of the RS’s cornering line can be done with your right foot – but it certainly seems to change quite a lot from mode to mode. In Track mode, Put is using no corrective lock at all. But he’s also not afraid to open the taps on the engine’s overboosted 347lb ft of torque long before he’s taken the lateral cornering load out of the tyres – and he doesn’t seem to be contending with any limiting understeer at all.

Later, back in Drift mode, he’ll demonstrate the potential for surprisingly prolonged powerslides around the consistent radius of one of Lommel’s steering pads. It’s quite something to experience – not quite donut after lock-stop-hitting donut but equally, I suspect, something much more akin to the controllability and rear-drive feeling you get from an Audi R8 than an RS3.

The impression stuck in my head as I climb out of the car is one of what, I’m confident enough to predict, must be a remarkable-handling and involving hot hatchback – one of Ford’s greatest yet. That, and the outline of five digits and a symbol, lingering like the halo of a bright light scorched onto your retinas: £28,940. Less than a Honda Civic Type R, less than a Golf R, less than a BMW M135i – all of them considerably less powerful and, on very limited evidence, admittedly, less dynamically talented.